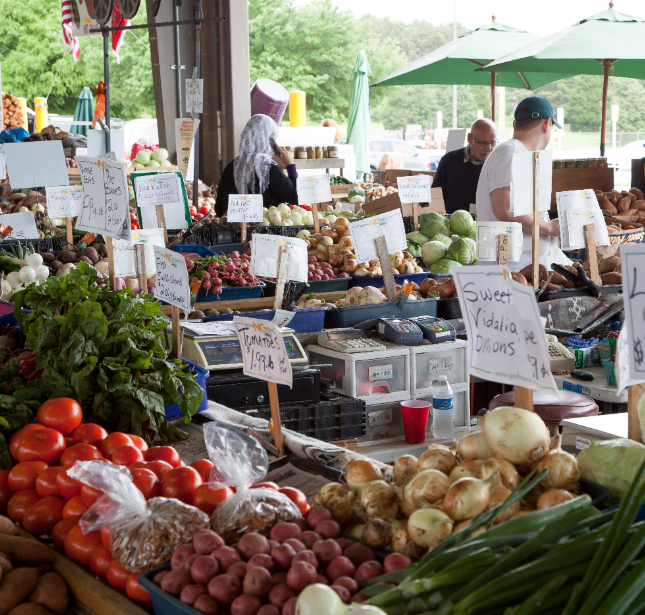 Baylen Linnekin is a food lawyer, scholar, and adjunct law professor. He’s the author of Biting the Hands that Feed Us: How Fewer, Smarter Laws Would Make Our Food System More Sustainable. Baylen serves on our board of directors. His below article first appeared on Reason.com.

Farmers markets, a vital link in the food chain for many U.S. consumers and small farmers, are under threat across the country as lawmakers and regulators scramble to restrict public gatherings in the face of COVID-19.

Seattle, where I live, last week ordered city markets closed until April 15. And in Virginia, a bill would temporarily close markets throughout the state.

“Seattle—where the spread of coronavirus began earlier and is further along than in most other parts of the U.S.—[recently] announced that all farmers markets would close for at least a month,” Greenaway wrote this week in a must-read piece in Civil Eats. “Seattle suspended all large gatherings and the markets have been lumped together with parades and public parties.”

Lumped though they were, several farmers who normally vend at the Sunday market in Ballard, a vibrant Seattle neighborhood filled with breweries, restaurants, bars, clubs, and funky shops located near my home, showed up to sell their food despite the city ban. Some argued the markets are safer than grocery stores.

“And honestly, if you’re gonna go buy produce, would you rather go into a really crowded [grocery store] right now, or would you come into an open-air market where everyone’s actually observing social distancing and keeping everyone apart?” one Ballard market vendor told local NPR affiliate KUOW this week.

In Ballard, consumers were there to meet the farmers.

“I’m here today to support both the community and the farmers and to make a statement to the City of Seattle that we need to be supporting local farmers and that the farmers market should not be shut down,” Ballard market customer Mary Purdy told KUOW.

While Seattle’s markets are closed, markets elsewhere are open—including, for example, in Philadelphia; Portland, Oregon; and the Bay Area.

Indeed, California declared the state’s farmers markets “essential to the functioning of our state” and said they “must continue,” along with other activities such as allowing grocers and charitable food pantries to remain open. Wisconsin, Pennsylvania, and Connecticut have issued similar declarations.

The Farmers Market Coalition (FMC), a nonprofit that seeks to strengthen farmers markets around the country, thinks markets should have the choice to remain open. And it’s outlined several steps to accomplish that goal while addressing farmer and consumer safety—including eliminating food sampling, requiring vendors who handle money to wear gloves, and promoting social distancing recommendations.

If lawmakers don’t allow farmers markets to remain open, the impact on many small farm businesses will be swift, severe, and in many cases fatal.

“[G]rowers are in the midst of buying and planting seeds, and planning for their busy time of year,” she writes. “Losing the opportunity to sell at farmers’ markets, on top of loss of sales to restaurants and institutions like schools, could be a devastating blow.”

Many others are sounding the alarm.

“The fragility of our food system is evident right now, and it should be a time when society recognizes and supports the small farmers providing food for their local communities more than ever,” says Judith McGeary, head of the Farm and Ranch Freedom Alliance (and, alongside me, a Farm-to-Consumer Legal Defense Fund [FTCLDF] board member), in an email to me this week. “If farmers markets are closed, though, not only will individuals have an even harder time finding food for their families, but many small farmers will go out of business—making the food system even more fragile as we get through this crisis.”

“It is more vital than ever that small producers be able to provide fresh foods direct to consumers,” says Alexia Kulwiec, Executive Director of FTCLDF. “Losing the ability to provide food through the farmers’ market could also be the last straw for small farms struggling to make ends meet in an agricultural economy already controlled by large corporate supported farms.”

FTCLDF sent out an action alert to Virginia members this week, urging them to contact lawmakers in the state about the proposal to shutter farmers markets there.

“[F]armers markets are an essential service that tens of thousands of farmers and millions of consumers rely on them for their livelihood and their food access,” said Ben Feldman, Executive Director of the FMC, in an email to me this week. “As most farmers markets are flexible, open-air environments they already offer advantages for shoppers and across the country are taking steps to implement best practices on social distancing to prevent the spread of COVID19.”

Brian Coppom, who’s both president of the FMC board and Executive Director of the Boulder County Farmers Markets in Colorado, told me this week that lawmakers should recognize that farmers markets are an essential service and must be allowed to operate safely.

Coppom’s own Boulder County markets are among those forced by lawmakers to close temporarily.

“Our opening has been delayed 30 days due to limits on events, leaving almost 50 farmers without an outlet for crops that need to be harvested,” Coppom tells me. “In addition to our general customers, we also have 1,100 low-income families every week that rely on the markets to put healthy food on the table and who no longer have access to that food.”

It’s easy to see how, as Coppom explains, shuttering farmers markets “exacerbates hardships across the board.”

These small farmers aren’t asking for a handout. All they want is to serve their hungry customers—to do business to stay in business—just like a grocer or a take-away restaurant.

I support most temporary restrictions on public gatherings in the face of COVID-19. Government mandating the temporary closure of places people normally congregate closely—from playgrounds to libraries, churches, bars, and dine-in restaurants—is a proper action that will help save lives. But farmers markets—just like grocers, pharmacies, and hardware stores—provide a necessary and valuable service.

Hence, farmers markets can and should still be free to operate provided they act to limit contact between and among consumers and vendors. If a farmers market manager, working with farmer vendors, determines a vendor or a market can’t operate safely, then, by all means, the market should close until it can safely reopen—as has happened in Honolulu and New Orleans. If a regulator witnesses unsafe practices at a farmers market, that regulator should act swiftly to address the problem.

But closing farmers markets indiscriminately doesn’t make Americans safer. And it harms the small farmers—some irreparably so—that many of us rely on to provide us with fresh, healthy, and tasty food. If this is the worst time in memory—and it is—then some lawmakers and regulators are targeting farmers, consumers, and the very institution of farmers markets at the worst possible time.