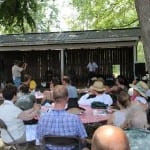 Despite the summer heat wave and temperatures above 106 degrees, nearly 200 supporters of the Farm-to-Consumer Legal Defense Fund (FTCLDF) celebrated the 5th Anniversary of its founding on Saturday, July 7, 2012.
NEW: Watch the event video

END_OF_DOCUMENT_TOKEN_TO_BE_REPLACED

We are now approaching the fifth anniversary of the Farm-to-Consumer Legal Defense Fund (FTCLDF) and I couldn’t be prouder of the work this organization has done. I believe there is no more important organization to safeguard real foods from the perils of modern day thinking (bigger is better), trumped up food safety concerns and government penchant for overregulation at the expense of