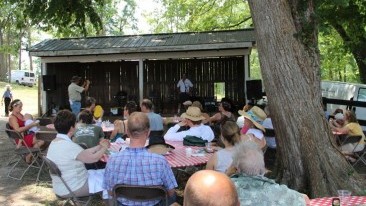 Despite the summer heat wave and temperatures above 106 degrees, nearly 200 supporters of the Farm-to-Consumer Legal Defense Fund (FTCLDF) celebrated the 5th Anniversary of its founding on Saturday, July 7, 2012.

The event began with a tour of Geoffrey and Sally Morell’s new farm, P.A. Bowen Farmstead in southern Maryland. Afterwards, guests dined on a large knoll under huge trees that looked to be hundreds of years old. Young and old alike, enjoyed the bluegrass music of Gary Rue and the Smoke Creek Rounders.

Other items on the buffet were anniversary gifts by friends of the Fund. Grass-fed beef brisket was donated by US Wellness Meats. Our host and hostess served pulled pastured and whey fed pork and Prince George’s Blue Cheese from their P.A. Bowen Farmstead. Artisan whole grain bread (using To Your Health Sprouted Flour) and pineapple mango chutney were made by WAPF chapter leader, Maureen Diaz. 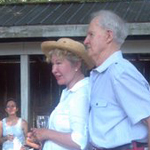 The Fund has faced its share of heat since it launched on July 4, 2007. Government agencies have stepped up their efforts to quell enthusiasm for farm fresh milk. Farm raids, surprise inspections, infiltrating spies and federal investigations pose a very real threat to consumer access to farm fresh food from the provider of their choice.

Cathy Raymond, Administrator for FTCLDF, shared a story confirming the value of the Fund. “A farmer who is here today, helped us launch the Fund 5 years ago. Last week, we received an urgent call for help from one of his buying club managers. All of us working together in this way is powerful.”

Most families that seek out special sources of food are doing so for serious health reasons. Some of the methods of production used by small farms, while perfectly safe, may not pass muster with food regulators. Unfortunately, today’s regulations and expensive infrastructure requirements serve as barriers to market entry. That is why FTCLDF promotes the idea of unregulated farmer-to-consumer direct trade. This one change alone could revitalize our rural economy. 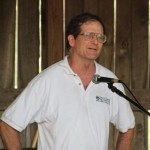 lth regulations often require ‘kill steps’ that deaden the food and take away vital nutritional elements. For some who are extremely sick, this processed food is not sufficient to heal and restore their body. Even previously frozen meat or dairy can be hazardous for someone who has compromised health. For this reason, the Fund has helped farmers establish private buying clubs so that, in the framework of direct accountability, the consumer–rather than the government–can have a say in the farm’s production and safety protocols.

As this is a paradigm shift that the current regulatory scheme has yet to embrace, the attorneys at FTCLDF are working overtime. A flurry of attacks against private food clubs, initiated by the FDA, is keeping Fund attorneys busy. The Fund’s attorneys counsel and defend not only farmers, but also, artisan food producers, managers of food co-ops and now even consumers who face criminal charges. 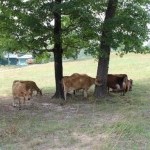 D. Gary Cox, Esq., General Counsel for the Fund, gave an encouraging message about the successes of their legal efforts on behalf of farmers. “We have enabled many farmers to stay in business, with our legal work and representation–farms that otherwise would have certainly closed.”

The Fund continues to work in other areas besides raw milk, explained President, Pete Kennedy, Esq., “We are co-counsel on a right-to-farm case in Michigan and have assisted in the effort to overturn the swine invasive species order in that state as well.” He also shared with the crowd that the Fund is now joining forces with other organizations and working collaboratively on food rights issues.

Co-Managers of the P. 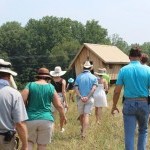 A. Bowen Farmstead, Mike Haigwood and Barb Haigwood led guests on walking tours of the farm. They explained the philosophy and practices of the farm, which are modeled after Joel Salatin’s Polyface Farm in Central Virginia.

The farmstead is a historic property, named after Dr. P.A. Bowen, one of the first owners. It was featured in a recent Washington Post article.

Click here to learn more About FTCLDF and watch the Intro video in the right sidebar.

Ready to do your part? Here are three ways to help the Fund!