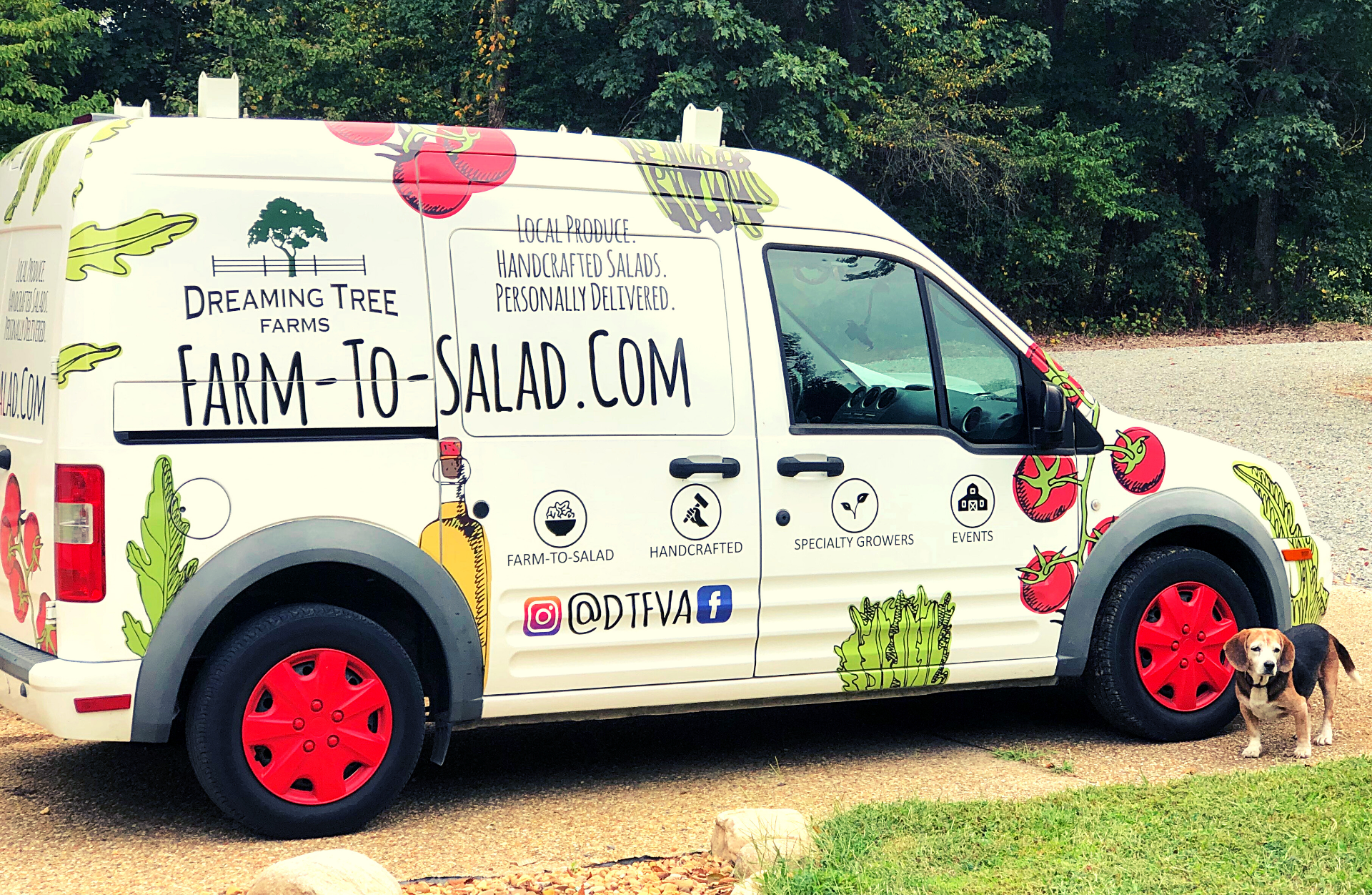 Chris Couch owns and manages Dreaming Tree Farms, a small farm outside of Richmond, Virginia that sells prepackaged salad kits for a weekly-delivered subscription service under the name Farm-To-Salad. He started out as a hobby farmer in 2009 and in 2017 decided to leave his job as a management consultant to pursue a more fulfilling career growing healthy food for his community.

Couch had a vision for his agribusiness and worked with King William County to change his land classification from rural residential to agricultural and register as a food manufacturing business with Virginia Department of Agriculture and Consumer Services (VDACS). He also had discussions with the King William County Commissioner of Revenue office about the tax required to be collected on the products and was told his products were exempt from the County’s Meals Tax Ordinance. Couch agreed since the farm business is more like community supported agriculture where a farm delivers its products through weekly subscriptions.

Couch moved forward with his business and obtained a United States Department of Agriculture (USDA) grant and invested in a greenhouse, an onsite kitchen, and his leading marketer: a custom wrapped delivery van. He was steadily picking up business and in summer of 2019 he even received an order from Commissioner of Revenue Sally Pearson herself and others in her office. Shortly after, she told Couch that he should be charging his customers a meal tax on each of the salads, similar to taxes restaurants collect. Couch did not feel it was right based on his review and understanding of the tax laws and because Couch and the Revenue office had discussed the tax rate at length two years prior. As he asked for justification for the change, Pearson kept giving reasons, none of them based in fact, why he needed to charge his customers the additional 4% meal tax.

What started as a pleasant customer-farmer exchange quickly eroded as Couch continued to present facts to support his position. Unable to justify the legitimacy of the tax on the Farm-To-Salad product, Pearson told Couch it didn’t matter what he thought since she was the Commissioner of Revenue and she canceled her weekly subscription to his Farm-To-Salad service.

Central to this issue is the definition of serving size. The ingredients in the Farm-To-Salad product vary each week but usually consist of local salad greens, vegetables, cheese, grains, toppings, and a farm-made dressing. The salads delivered to over 200 weekly subscribers are identical to one another, the only variations to avoid the major food allergens. The prepackaged salads are 15-17 ounces, which is considered 3-4 servings as defined by the Food and Drug Administration (FDA) and consistent with prepackaged salad kits sold in grocery stores across the nation. The primary difference between them is the Farm-To-Salad product is locally sourced and manufactured and delivered by a local farm.

Pearson however insists that the salads are single serving, according to her own definition. Upon appeal she ruled that these salads should be taxed as a restaurant and did not address the salad kits from a grocery store to which Couch compared his products. She says serving size is not defined by the Virginia Food and Beverage Tax Code, and that each locality can interpret “serving” with complete disregard to federal food guidelines established by the FDA.

Couch argues that the definition of serving is clearly defined and has been in place for decades. Every food product manufactured for sale in the United States is labeled according to these FDA standards and they are taught in grade schools and used ubiquitously throughout society. Since Dreaming Tree Farms is a manufacturing business, Couch is required to label his products based on FDA labeling standards, something restaurants and food trucks are not required to do.

As he looked further into the taxes levied by the county, he noticed errors on his property and farm equipment taxes. Other taxes imposed on residents across the County were incorrect due to a so-called computer glitch. Couch has met other business owners and taxpayers with similar negative experiences working with Pearson when trying to correct erroneous taxes levied by her office.

Couch had hoped that standing up to these unjust taxes would raise awareness to the issues and improve the services he and other taxpayers and businesses receive from their local government.

Sadly this hasn’t happened. At a King William County staff Halloween party this past October, the Commissioner and others in her office mocked Couch’s farm business by dressing up as a salad for their group-themed costume. The photo was posted on social media and the County Administrator issued an apology submitted into the public record calling the costume “inappropriate and unprofessional.”

As the legal fees to his small farm business increased and attempts to resolve this through the Board of Supervisors, County Administrator, and County Attorney led nowhere, Couch submitted a Freedom of Information Act request to find out how much King William County has spent in attorneys’ fees fighting him on this tax issue: an astounding $26,000 of taxpayer dollars. For the County to recoup these legal fees, Couch would have to sell over 50,000 salads in King William County.

Pearson and King William County have no issue wasting taxpayer dollars for what now seems to be a personal vendetta to the detriment of common treatment by the law.

Couch is a Farm-to-Consumer Legal Defense Fund (FTCLDF) member and FTCLDF attorney Suzy Israel is advising Couch and his attorney on this matter. “This is an egregious example of a farmer being abused at the hands of a bureaucratic despot, who long ago dropped any pretense of fairness,” Israel stated. “I have battled dozens of local government officials during my work with FTCLDF, but King William County’s mean-spiritedness is stunning in its brazenness. Although the County’s blatant disrespect is unusual, this win-at-all-costs mentality is not uncommon among local governments. And it is exactly why so many enterprising small farmers cannot get their businesses off the ground.”

Couch is awaiting a response on an appeal to the State Tax Commissioner from the Virginia Department of Taxation to issue an opinion that will hopefully resolve the matter. After submitting the appeal to the State, King William County has challenged the appeal, claiming the State does not have jurisdiction, which would push this matter to circuit court and incur additional legal fees—all over the definition of a serving size. “It would be simple to just charge my customers this additional meals tax, and King William County has used this reasoning to try and resolve the matter,” Couch said. “Rather than just roll over and accept their argument without any evidence, I am standing up in defense of my customers. If ‘serving size’ is to be so cavalierly defined at the local level, what’s next? King William County gets to define square foot, pound, or acre to their liking?”

More information about Chris Couch, his farm, and agribusiness can be found at www.DreamingTreeFarms.com