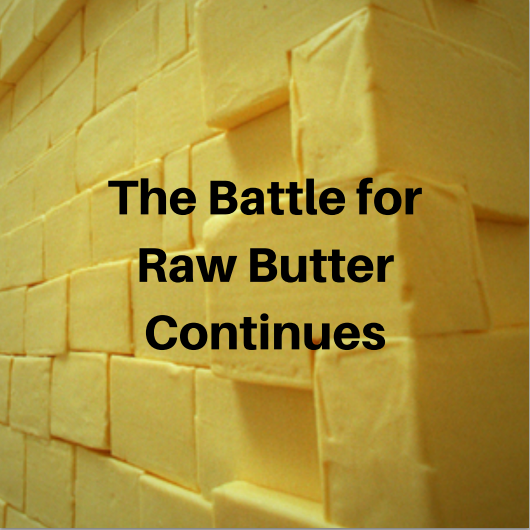 On February 27, 2020, four years after the Petition filed by the Farm-to-Consumer Legal Defense Fund (FTCLDF) and member Organic Pastures Dairy Company, the Food and Drug Administration (FDA) issued a decision denying our request to permit the interstate sales of raw butter. The parties now plan to challenge this decision, asking the federal court to overturn the decision of the FDA.

You may recall that in June 2016, FTCLDF and Organic Pastures Dairy Company filed a Petition with the FDA requesting it to permit the interstate sale of raw butter. We argued that the FDA lacked the legal authority to include butter in the interstate ban as this changed the legal standard of identify of butter. We also argued that the chemical and biological properties of raw butter make it a safe product with very low pathogen growth. In its February 27, 2020 decision, the FDA criticizes the scientific studies cited, without providing sufficient evidence to the contrary.

In addition, the FDA relied on statistics from 1908–2003, and no later, to support its claim that butter has in fact led to illness. In these years, the FDA cites only one alleged time period in which illnesses were attributed to raw butter, 2001–2002, during which time one hospitalization was alleged to be attributed to raw butter and no deaths. The FDA did not challenge the FTCLDF’s citation to there being few illnesses from raw butter in the more recent years of 1998–2016.

What You Can Do

We are working on our lawsuit to overturn the FDA decision. The legal work to challenge this decision will be costly as it requires scientific expertise and evidence as well as legal arguments. To continue to challenge the FDA, we could really use your financial support. To donate, please visit HERE.