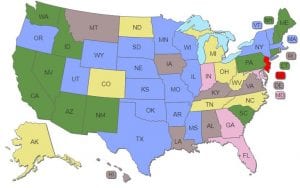 Raw milk laws differ from state to state, due in part to the federal ban on the interstate transport of raw milk for human consumption. This raw milk map reflects the statutes, regulations, and court cases in effect as of January 1, 2018.

Note that the question of whether a state’s residents have access to raw milk may or may not correspond well to the published law. For example, while the retail sale of raw milk is legal in Nevada under statute, the requirements for selling it are such that there is no licensed raw milk dairy in the state. In addition, in some states where there are no laws on herd shares, the state agencies actively seek to close down herd shares; while in other states with an identical lack of law, the agencies are currently choosing not to pursue known herd shares. This map should therefore be used for general informational purposes only.

The map indicates the most permissive category for obtaining raw milk in each state. Please see the chart below the map for a more detailed look at how raw milk can legally be obtained in your state.

Major changes since the prior version of the raw milk map are:

For states that still have a lack of access, or that have laws which give access in name only, the progress may seem slow, but nationally we can see progress: the vast majority of the states in the nation allow access to raw milk in one form or another, which wasn’t the case just two decades ago.

If you have questions about the laws applicable to you in your state, you should consult with a licensed attorney. Farm-to-Consumer Legal Defense Fund (FTCLDF) members: you are welcome to contact FTCLDF concerning laws that apply to your farm.

If you’d like to make a contribution to support the work of FTCLDF, donate/find out more or join us today!