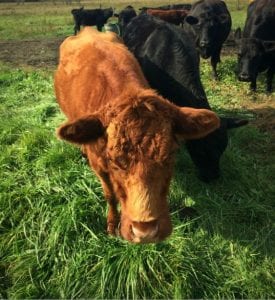 In a breakthrough for the local food movement in Tennessee, the state Office of the Attorney General has issued an opinion holding that “there is no limit on the number of owners for whom a custom slaughterer may legally slaughter and process an animal or animals.”1 The opinion also held that one or more of the owners of a custom-slaughtered animal can be a cooperative or association such as a food buyers club. Custom slaughter refers to the slaughtering and processing of animals into meat which cannot be sold by the owners of the animals. Custom slaughterhouses are inspected for sanitation, recordkeeping, and labeling among other requirements but, unlike U.S. Department of Agriculture-inspected (USDA) and “state-inspected” slaughterhouses, an inspector does not have to be present during the slaughtering and processing.

State Senator Frank Niceley, who has made a huge impact in improving the regulatory climate for small farmers in Tennessee, was the legislator who requested the opinion. The Farm-to-Consumer Legal Defense Fund (FTCLDF) worked on the matter with Senator Niceley, who is a cattle farmer and FTCLDF member.

The significance of the opinion is that it should improve the ability of farmers to market meat from animals they raise as well as increase consumer access to locally produced meat, keeping more of the food dollar circulating in Tennessee. Small farmers have limited access to USDA-inspected slaughterhouses in much of the state; Tennessee has no state meat inspection program. Many states only allow custom-slaughtered animals to be divided up among no more than four individual owners, substantially reducing demand for livestock farmers since many consumers do not have either the freezer space or the money to purchase a quarter animal. The Attorney General opinion makes it more affordable for consumers to buy an interest in a custom animal, increasing demand for locally produced meat.

Senator Niceley said that in the eastern half of the state there are 30 custom slaughterhouses and only 3 USDA facilities; the existing infrastructure can benefit from the Attorney General opinion.

The opinion is right in line with the position of USDA’s Food Safety Inspection Service (FSIS) that there can be an unlimited number of owners for a custom-slaughtered and -processed animal.2,3 Senator Niceley referred to the custom facilities in the state as “USDA customhouses” because FSIS conducts inspections of them rather than the Tennessee Department of Agriculture. Hopefully, whether it is FSIS or the state Department of Agriculture inspecting the custom facilities, the opinion will lead to other states adopting this interpretation of the law; nearly half the states do not have their own meat inspection program. With the shortage of inspected slaughterhouses throughout the country, the unlimited owner policy at custom facilities is a way to enable livestock producers to better meet the growing demand for pasture-raised meats.

2 USDA-FSIS Policy Development Staff. [Incident: 160105-000055]. Response via email January 6, 2016. [PDF] Editor’s Note: FSIS amended the response April 12, 2017 [PDF]; the number of livestock owners is unlimited but a record of the identity of the individual owners with their household addresses is to be maintained by the custom exempt operator.