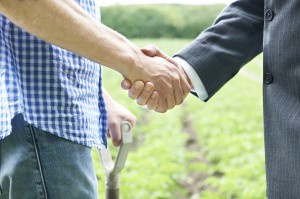 Recently PR Newswire reported, “More than half of American consumers would like to talk to a farmer even though the vast majority—94 percent—indicated in a recent survey sponsored by Bayer CropScience that they have no connection with agriculture or farming.” The article continued on to say, “Consumers trust farmers by far more than scientists, nutritionists, government agencies, companies engaged in farming or agriculture, even social media contacts outside agriculture.”

While I wasn’t surprised by the article’s findings, I was a bit concerned by who conducted the study. Why was Bayer CropScience doing surveys of American consumers’ impressions of farmers?

A quick internet search revealed, as Paul Harvey used to say, “and now, the rest of the story…”

The perception by the American consumer of industrial agriculture chemical companies is currently at an all-time low. Consumers are waking up and demanding local foods that are raised by holistic methods. Bayer CropScience produces fungicides, herbicides and pesticides along with genetically modified seed. Bayer recognizes that they are losing the market and realizes the need to do a full marketing blitz on consumers. Who better to help them accomplish their task than the trusted farmer?

Much like physicians in the 1930s who endorsed smoking for relaxation, farmers today are being asked to endorse the use of industrial agrichemicals based on the word and research of the agrichemical companies. While some farmers are boldly taking a stand and demanding unbiased research while seeking information from other sources, many farmers believe the agrichemical representatives who promise them higher crop yields each year—if they just use chemicals.

Currently there are 12 Bayer Corporate Facebook pages covering the majority of the agrarian continents in the world. Just recently, Bayer has presented on raising rice in the East and hosted the Australian Youth Ag Summit. They’ve recently put a new insecticide on the market and are setting up another research site in Germany. Concerned about “feeding the world,” they are diligently working to ensure that their reach is rapidly covering the entire globe, and their website calls for a “New Agricultural Revolution.”

A harsh reality has become uncomfortably clear: Bayer’s influence isn’t just on your physician; it is also on your farmer. Their large social media presence around the world is actively moving to win over the hearts and minds to their “New Agricultural Revolution.” Bayer knows that consumers trust their farmers, just as consumers trust their doctors. If Bayer can get the consumers to listen to the farmers telling them that the chemicals are safe, satisfied consumers will stop grumbling and take their medicine.

Bayer is exceedingly transparent about their interest in promoting farmers to consumers. “Consumers desire the benefits of modern agriculture technology, but they remain apprehensive of it,” said Jim Blome, Bayer CropScience LP President and head of crop protection for North America. “Farmers can help bridge that gap.”

Bayer is correct. Farmers are trusted by consumers, and they are in a position where their stance on agrichemicals will influence the health of the nation…and Bayer’s profits. While Bayer seeks to use the farmers to achieve their goals of anchoring agrichemical sales, farmers have the responsibility to sustainably anchor their own farms to ensure long-term viability. Sustainability means that the farm must be environmentally sound and socially responsible as well as economically viable.

So whom do you trust when it comes to your food? The government, Bayer, your farmer or yourself? With a government that isn’t testing for glyphosate (Roundup) levels on crops, and Bayer who directly profits from agrichemical sales, it appears that farmers may be our last hope for honest information. This is a tall order, however, as many farmers don’t have the awareness or time to access the information they require to make an educated decision. Further, many are so heavily engaged in agribusiness practices that changing practices is daunting due to the financial risk. As such, the reality is that it is up to consumers to make the connections and demand to be heard by voting with their diet and their dollars.

Pam Holloway is a member of the Farm-to-Consumer Legal Defense Fund.

Pam Holloway, RN, MS is the director of Sosoni Institute, a 2015 Savory Hub Candidate and the Co-Owner of Sosoni Institute & Farm in Moscow, Idaho. A recovering business executive, she has returned to her roots and is working to change the culture of food and health through locavore living. Active in developing legislation to support a vibrant locavore lifestyle, you can follow the Sosoni Institute at www.facebook.com/sosoniinstitute.