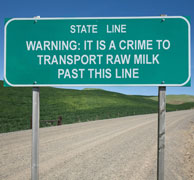 In March 2012 Federal District Court Judge Mark W. Bennett dismissed a lawsuit filed by the Farm-to-Consumer Legal Defense Fund (FTCLDF) and eight of its members against the United States Food and Drug Administration (FDA) over the federal regulations banning raw milk for human consumption in interstate commerce. The judge dismissed the suit for lack of standing; the case never reached the point of scrutinizing the merits of the alleged validity of FDA’s science the agency claims used to justify the federal ban. Now it looks like there will be a second and better opportunity to force FDA to defend its view that raw milk is a high risk food that should not cross state lines.

On March 7 Organic Pastures Dairy Company, LLC (OPDC) sued the FDA over the agency’s denial of a citizens petition filed by Mark McAfee (OPDC president and founder) along with Christine Chesser (a California raw milk consumer) seeking to modify the interstate raw milk ban to allow the shipment of raw milk from one state where its sale is legal to another state where its sale is legal. OPDC initially filed the petition in December 2008; federal law requires an agency to respond to the petition within 180 days. After waiting for four years for an answer to the petition, OPDC filed a writ of mandamus action in December 2012 to obtain a court order requiring FDA to provide an answer. On February 26 before the court deadline FDA had for filing an answer in court, the agency sent McAfee a letter denying the petition, rehashing much of the documentation on the alleged dangers of raw milk that led FDA to issue a regulation instituting the ban in 1987.

Since FDA had not yet filed an answer to the writ of mandamus petition, OPDC had the option under the federal rules of civil procedure to amend its complaint. In the March 7 complaint, FTCLDF General Counsel Gary Cox, who is representing OPDC, took advantage by replacing the writ of mandamus suit with an action seeking a court order to grant OPDC’s petition on the grounds that FDA’s denial of the petition was “arbitrary and capricious” in violation of the Administrative Procedures Act. FDA filed an answer to the amended complaint on March 20 denying the allegation.

OPDC’s complaint highlights the double standard FDA uses against raw milk compared to other foods. The complaint notes, “FDA in its denial points to statistical data to support it conclusion that because raw milk can cause illness and death it should be prohibited from crossing state lines . . . . FDA, however, fails to consider and/or ignores its own statistical data that other foods, including without limitation, pasteurized milk and cantaloupes, can also cause illness and death. FDA further fails to make any rational connection between these available statistical data and its conclusion that, while other potential illness or death-causing foods are permitted to cross state lines, raw milk is not so permitted.” The complaint goes on to point out that at least 36 people died from consuming cantaloupe in 2011 and 2012, and in two separate outbreaks–one in 1983 and the other in 2007—a total of 17 people died in Massachusetts from the consumption of pasteurized milk.

The complaint further states that although FDA claims “in its denial that there is no reliable method available to guarantee that raw milk . . . will not cause disease . . . FDA does not have a requirement that foods must be ‘guaranteed’ not to cause disease.”