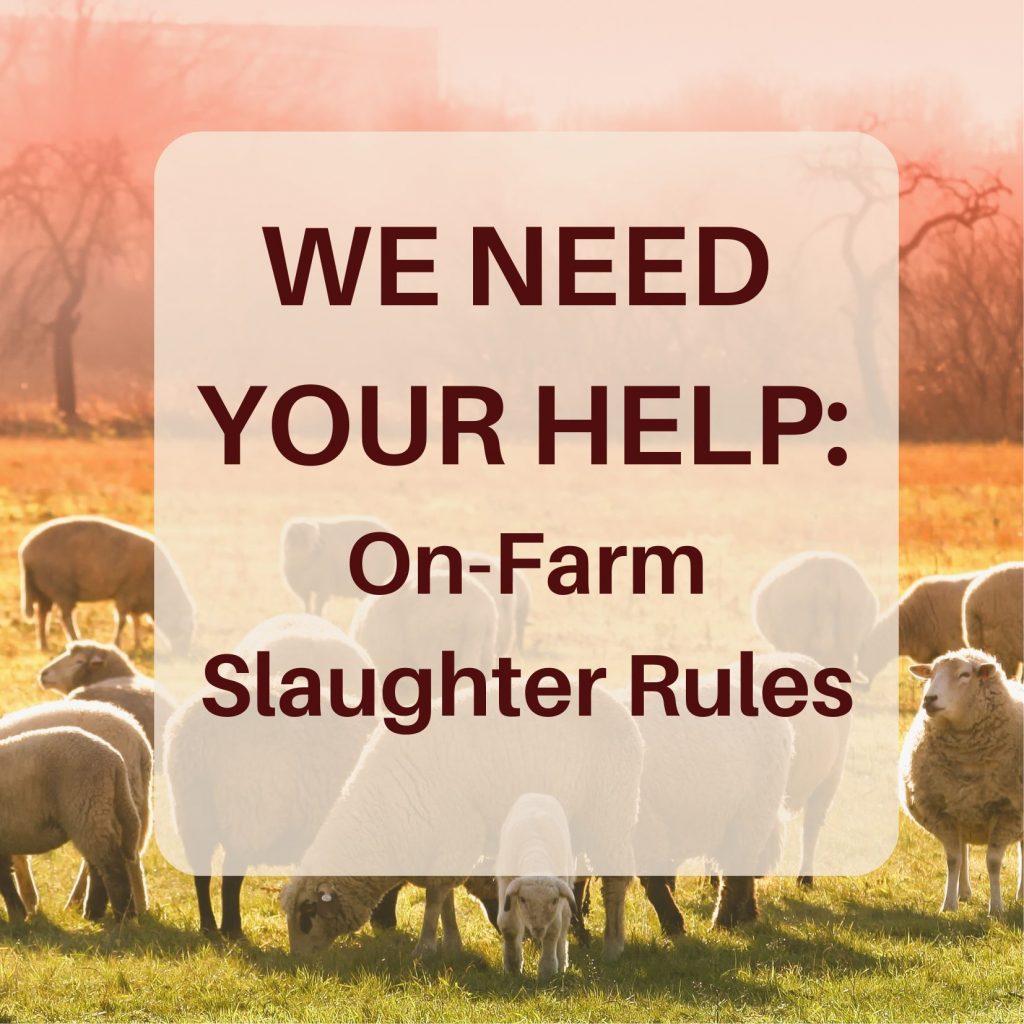 The Farm-to-Consumer Legal Defense Fund has joined an effort to clarify federal law as it relates to on-farm animal slaughter rules and we need your help! This issue arose early in 2022 when we became aware that the federal Food Safety and Inspection Service (FSIS) was threatening to impede on the “equal to” status of Vermont’s meat inspection program if animal share programs were written into law. In reaction to the threat, the Vermont Agency of Agriculture, Food & Markets (VAAFM) notified on-farm slaughter practitioners that in order to qualify for the federal exemptions that allow on-farm slaughter for personal use, all owners of the animal must conduct the slaughter and/or be present if they hire an itinerant slaughterer to process on their behalf.

VAAFM’s stance suggests that each and every owner of an animal would need to be present on the farm where their animals were raised to witness the slaughter if they want access to the meat that is harvested. In fact, Vermont’s on-farm slaughter law does not prevent farmers from organizing on-farm slaughter; it just prohibits them from assisting in the slaughter. This interpretation that requires that all owners be present for slaughter prior to animals being brought to a custom slaughter facility, if allowed to stand, would create an untenable situation for farmers and owners on whose behalf they raise the animals, and would grind local meat production to a halt.

Rural Vermont, an agricultural advocacy coalition, has taken a lead role in pushing back against this erroneous and punitive interpretation and has organized our organization and others to take action on behalf of Vermont and all states. Among other steps, we are asking Congress to intervene and confirm state laws that are based on federal personal use exemption and allow livestock owners to have an agent slaughter their livestock on the farms where the livestock was raised and to access their meat without state or federal meat inspection.

We urge you to join us in supporting this effort! Please see Rural Vermont’s message below, sign on to the petition below asking Congress to act, and share this alert with your friends and family across the country.

Currently, there are many people whose businesses rely on the personal use exemption, including farmers selling livestock for on-farm slaughter, itinerant slaughterers, and custom processors. In order for their operations to be in compliance, they are relying on 2018 guidance put forth by the USDA Food Safety and Inspection Service (FSIS). This puts them in a vulnerable position because an Agency can change their guidance at any moment.

It is time to update outdated language in the FMIA to ensure that standing FSIS guidance is more clearly visible in the written law so that on the ground practitioners have planning security, instead of them continuing to be vulnerable and subject to Agency discretion.

Donations to FTCLDF go directly toward helping small, sustainable farms around the country have a voice and protection against government overreach. We invite you to join us as a concerned consumer, cottage food maker, homesteader or small farmer today.