As a result of the AG opinion, the Indiana State Department of Health (ISDH) notified the farm and the restaurant that each could “disregard” a cease and desist letter sent on September 8 ordering both parties to cease sales of uninspected poultry. State Senator Jim Banks, in whose district both the farm and restaurant are located, requested the opinion after the issuance of the letters. Jeff Hawkins, the owner of Hawkins Family Farm, and Pete Eshelman, the owner of Joseph Decuis Restaurant, are both members of the Farm-to-Consumer Legal Defense Fund (FTCLDF). FTCLDF has worked for several years in Indiana protecting and expanding the rights of farmers to sell on-farm processed poultry (read about SB179).

ISDH sent Hawkins and Eshelman the cease and desist letter due to pressure from State Senator Jean Leising, the chair of the Senate Committee on Agriculture and Natural Resources. Both Hawkins and Eshelman had testified at an August 25 hearing before an Interim Study Committee on Agriculture and Natural Resources that was chaired by Leising. At the hearing, Hawkins testified how his on-farm poultry processing operation was a success story for scale-appropriate Indiana agriculture and Eshelman told the committee he was proud to serve Hawkins chicken on the Joseph Decuis menu. Leising berated both of them, publicly suggesting at the hearing that Hawkins and Eshelman were in violation of Indiana law regarding the sale of poultry to restaurants.

In its November 18 opinion letter, the Office of the Attorney General disagreed, showing how Leising had applied the wrong law to Hawkins Family Farm.

Indiana has adopted the federal lawA, allowing those farmers who raise and process no more than 20,000 birds a year to be exempt from the requirement that an inspector be present when slaughtering is taking place and conduct an ante-mortem and post-mortem inspection of the animals. Producers operating under the exemption can sell poultry directly to consumers, restaurants, hotels, boarding houses and retail stores.

In Indiana those producers wanting to sell to a customer other than an end consumer must obtain a grant of exemption from the State Board of Animal Health (BOAH). Hawkins obtained the grant in April 2015 and, at this time, is the only producer operating under the grant. Those producers selling only directly to the end consumer on the farm, where the poultry is produced, at a farmer’s market, at a roadside stand or through delivery to the end consumer have not been required to obtain a grant of exemption from BOAH, and are subject only to limited oversight from ISDH.

The fight is not over yet; Leising’s next move to roll back progress for local food is to introduce a bill in the upcoming legislative session requiring that no poultry exempt from ante-mortem and post-mortem inspection can be sold to restaurants or other food establishments. The bill emerged from the interim committee that Hawkins and Eshelman had testified before. The purpose of the interim committee was to deal with “issues related to facilitating an Indiana-based local farm and food production economy.” The bill states that “an emergency is declared for this act.” 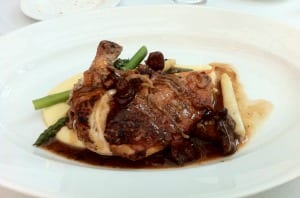 It looks like the “emergency” is for those firms who don’t want to compete with on-farm processed poultry; poultry produced under the federal exemption has a great track record for food safety with few, if any, cases of illness being attributed to its consumption in the 40-plus years the federal exemption has been in effect. By contrast, a report generated from CDC data from 1998-2008 identified poultry [read “poultry” as “inspected poultry”]—out of 17 different food commodities—as responsible for the most deaths, the third most hospitalizations, and the fourth most cases of foodborne illness.B

Commenting on the AG opinion, Eshelman said, “The process worked but now we have to get ready to stop Senator Leising’s bill.” Sales of on-farm processed poultry represent a huge source of income to Indiana’s small farms; the local food movement in the state needs to defeat any attempt to take it away.