In 2013, bills to expand raw milk access are being introduced in as many as sixteen states. The CDC report was issued during the 2012 legislative season. Raw milk proponents say the CDC report could have an impact on a number of state bills in 2013 that aim to broaden consumer access to raw milk. Raw milk bills in Indiana, Iowa, and Wyoming died in committee. Another example, would be Wisconsin, where Assistant Majority Leader Glenn Grothman plans to introduce a raw milk bill. Last week, Wisconsin public health officials and medical experts put out an anti-raw milk statement that relied heavily on the CDC study.

The Weston A. Price Foundation is a worldwide nutrition education nonprofit. Their Campaign for Real Milk (realmilk.com) works to restore this traditional food to its rightful place in the human diet.

The report has numerous scientific flaws that call in to question its credibility. For instance the report claims that there are more outbreaks in states that allow raw milk sales. The premise that allowing raw milk sales in a state leads to more outbreaks is not valid because the researchers lumped all dairy products together for analysis rather than limiting it to fluid milk. Since they fail to present analysis that compares laws concerning fluid milk and outbreaks attributed to fluid milk, we must conclude that they didnt find any statistical difference, says Fallon Morell. Despite the obvious motive to demonstrate a link between changing the laws to permit raw milk and increased public risk, they in fact demonstrate that they are unable to find any such consequences.

The CDC clearly documents the fact that it has no data to show a statistical increase in illnesses in those states that legalized sale. The real effect of changing these laws is to enhance the public health and increase the number of families that have access to wholesome, unprocessed milk with its vital nutrition and enzymes intact, explains Fallon Morell.

A close examination of reports on illness associated with raw milk reveals that there are an average of 41 illnesses attributed to raw milk each year, of which about 23 are confirmed illnesses. According to a federal agency phone survey, 3.04 percent of the population consumes raw milk. The most recent figures from the CDC published in March 2013 report that there are an estimated 876,209 foodborne illnesses per year in the U.S.

Using these figures, we might expect to see 26,637 foodborne illnesses per year among those people drinking raw milk says Dr. Ted Beals, a retired pathologist who has made a study of raw milk safety. Of those illnesses we see only about 41 illnesses per year attributed to the raw milk they drink. Only 0.2% of their illnesses attributed to all the foods they eat are associated with the raw milk they drink almost daily. These government numbers show us that raw milk is a very safe food.

The report confirms that there have been no deaths from fluid raw milk over the period of the report. By contrast, three people died from pasteurized milk in Massachusetts in 2007. The government reports 15 deaths per year from raw oysters and 30 deaths per year from eggs. Clearly government agencies are applying a double standard to raw milk, singling it out as inherently dangerous when other foods obviously pose a greater threat to health, says Fallon Morell.

We dont want anyone to get sick from raw milk, says Fallon Morell, and with reasonable management practices by farmers and consumers, we could reduce the number of illness even more than the extremely low numbers now experienced. Continued government opposition to freedom of choice is unproductive. Health officials need to acknowledge consumer demand for this nutritious food. Producer and consumer groups are capable of setting reasonable and effective standards. Health departments need to cease their entrenched antagonism and support both public and private measures that benefit raw milk safety. And when illnesses do occur, we need to take an unbiased look at what went wrong so that we can improve milk safety. 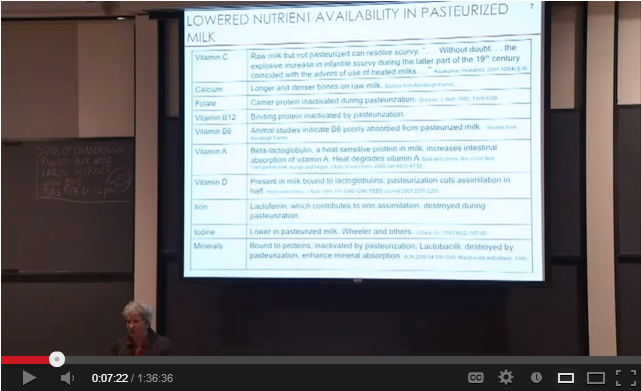