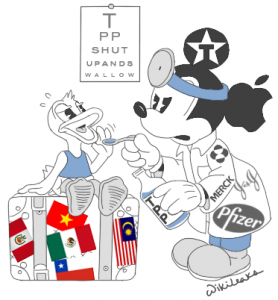 The TPP is a so-called "free trade" agreement negotiated between the U.S. and a dozen Pacific Rim countries. The reality is that the TPP is a permanent power grab by corporations that will interfere with the ability people in the TPP countries, including American citizens, to decide what laws and rules they want to live under. For instance, the TPP would disable the government's ability to regulate things like GMOs, pesticides, and food additives and would increase corporate control on the global food supply. 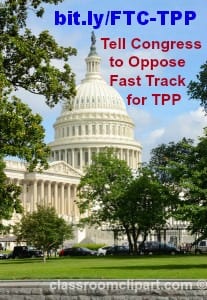 ACT NOW! Sign the FAX Petition and send your own comments to your U.S. legislators.

Help stop the latest push for “Fast Track” legislation. This type of legislation would enable corporate power grabs–like the Trans-Pacific Partnership (TPP) trade agreement–to be rushed through Congress without the normal procedures for amendments and debate.

END_OF_DOCUMENT_TOKEN_TO_BE_REPLACED

International courts, acting at the request of private corporations, overturning the laws adopted by your elected officials. Does that sound like a good idea to you? Scarily, if the Trans-Pacific Partnership (TPP) trade agreement goes through, you’ll see a lot more of this.