“He has erected a multitude of New Offices, and sent hither swarms of Officers to harass our people, and eat out their substance.” – Declaration of Independence

Farming is difficult enough without being subjected to burdensome regulations, excessive licensing requirements and fees, inconsistent interpretations of the laws, and heavy-handed enforcement tactics by government agencies. This space features accounts from around the country of government roadblocks to the small farmer’s ability to make a living.

San Juan County in Washington state did the indefensible. They closed a farm stand that had been in operation for more than two and a half years because the county recently decided that since the farm stand was “open to the public,” it had to meet commercial building requirements.

END_OF_DOCUMENT_TOKEN_TO_BE_REPLACED 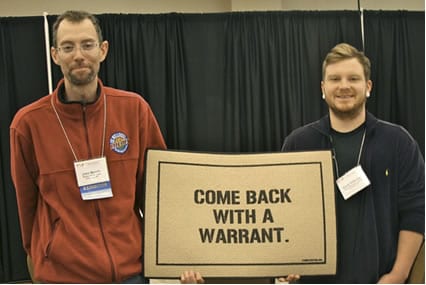 When an inspector from the Louisville Metro Department of Public Health and Wellness showed up with a ‘cease and desist’ order and slapped a quarantine order from the Kentucky Department of Health Services on 76 half gallons of raw milk about to be picked up by members of a local buying club, the club members’ defied the orders. John Moody spoke on how to be prepared for a government raid over food.

END_OF_DOCUMENT_TOKEN_TO_BE_REPLACED

By Monte & Laura Bledsoe | November 18, 2011 On the evening of October 21, 2011 as guests were arriving for the first ever “Farm to Fork Dinner” at Quail Hollow Farm, Southern Nevada Health Inspector Mary Oakes under orders from Supervisor Susan LeBay, formerly a pool inspector in 2005, showed up as well and […]

END_OF_DOCUMENT_TOKEN_TO_BE_REPLACED

When an over-zealous regulator shows up at a farm dinner demanding that food be destroyed as hungry guests await, who do you call? Here’s Laura’s account written as a letter to her guests who had come to Quail Hollow Farm expecting a meal of foods harvested from local small family farms. This incident shows the […]

END_OF_DOCUMENT_TOKEN_TO_BE_REPLACED

On December 10 Rae Lynn Sandvig, a Bloomington raw milk and local food consumer, received a letter from the Minnesota Department of Agriculture (MDA) informing her that MDA had “scheduled an administrative meeting concerning your sales of food, your actions assisting in the sale of raw milk from your home in Bloomington, Minnesota, and the sale of food from the Traditional Foods Warehouse (TFW)….” TFW is a private buyers club located in Minneapolis.