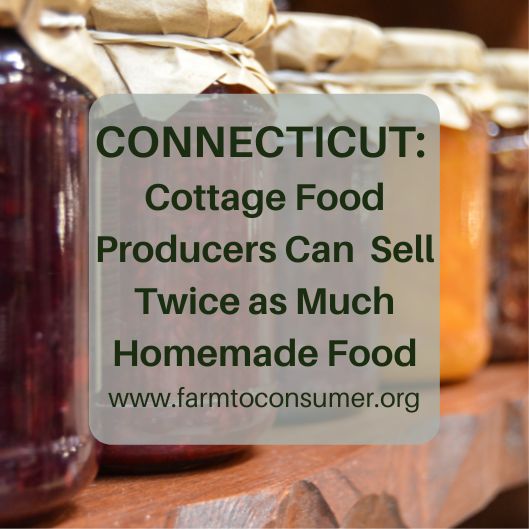 Connecticut home cooks, bakers, and artisan food producers are celebrating the opportunity to expand their operations!  Senate Bill No. 187 (Public Act No. 22) has been signed by Governor Ned Lamont.

The amended law will allow a 100% increase – from $25,000 to $50,000 – in annual revenue earned by a producer from the sale of homemade foods, commonly referred to as “cottage foods.”  Cottage food producers no longer need to obtain any licensing from the state unless their annual sales exceed the $50,000 threshold.

“Farm-to-Consumer is so pleased that home food producers have greater flexibility to sell locally in Connecticut,” says Alexia Kulwiec, Executive Director of FTCLDF. “Policies assisting smaller producers are so vital to building a strong and decentralized food system.”

Most states have cottage food laws that set low revenue limits, restrict the types of foods that can be made at home, and limit where sales of those foods can take place. Connecticut has seen the value of allowing residents to expand home-based economic opportunities by increasing the revenue cap.  Although the complete removal of the cap sought by some proponents did not pass, doubling the revenue cap is a significant boost for those wanting to start or grow their cottage food business.

Some types of foods made in a home kitchen are still restricted. Connecticut allows the home production of most shelf-stable foods such as baked goods, jams and jellies, candies, and vinegars. Foods deemed potentially hazardous – typically food that require refrigeration – are not allowed. Subject to certain labelling requirements, Connecticut allows sales at farmers markets, sales made through advertising, and product sampling, subject to health department approval.

The legislative record on this bill reflects testimony that some cottage food producers left Connecticut for neighboring states with higher revenue caps or ceased their operations altogether when the cap stifled further growth. Once the new law becomes effective in October, the state’s homemade food businesses can increase sales up to the new cap.

The change in Connecticut represents greater expansion of food freedom laws and the value of policy advocacy efforts that result in meaningful change for greater freedom in food choice.