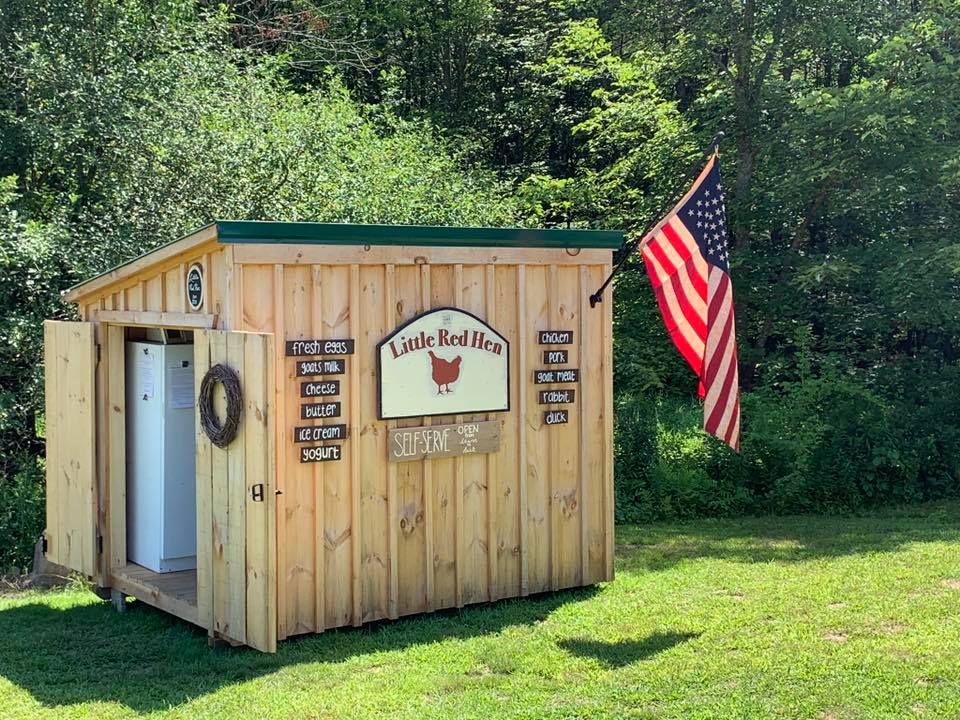 Jill Fudala, along with her husband Matt, own the Little Red Hen Farm & Homestead in Pittsfield, New Hampshire. Jill and Matt bought their house and three acres of land in 2011. As they learned more about conventional methods of raising meat, they were motivated to raise their own and to practice ethical and compassionate forms of animal husbandry. What started as a hobby farm has now turned into a small family farm on over 30 acres. The Little Red Hen Farm & Homestead now raises chickens, turkeys, ducks, goats, and pigs along with a small vegetable garden.

As their animal husbandry hobby grew, the Fudalas started selling farm-fresh products to the community via an Instagram-worthy farmstand at the end of their driveway. To the delight of lactose-intolerant customers and raw milk aficionados, Jill also produced raw goat milk ice cream. The ice cream, which came in flavors like cherry walnut, coffee Heath bar, and black raspberry, was a top seller. At the height of the summer season, Jill was selling up to 40 cups of raw goat milk ice cream a day at $3 per cup.

The State Gets Involved

However, in early August, Jill received a letter from the New Hampshire Department of Health and Human Services, threatening to fine her unless she stopped selling ice cream. In the message from the Department’s supervisor, Charles Metcalf, the state declared that New Hampshire law requires, “fresh cheeses and all other processed dairy products” be made with pasteurized milk. Exemptions allow milk producers to, “sell up to 20 gallons of raw milk or cream per day without being licensed…and to process that raw milk up to the 80-quart limit into raw ‘aged’ cheese, raw yogurt, raw butter, or raw kefir.”

Right away, Jill pulled the ice cream from her freezers. “My husband is a local police officer; we were not looking to break the law,” she said. However, the New Hampshire law does not explicitly mention ice cream. When Jill connected with the New Hampshire Department of Health and Human Services, she was told the legality of ice cream production, because it is not listed, can be inferred as being illegal, which can be confusing to producers.

The state further suggested Jill obtain a license to start pasteurizing her milk and conventionally produce ice cream. Jill is not interested considering the hefty $20,000 price tag of setting up a commercial kitchen. “Pasteurizing the milk goes against the grain for us. Our whole point is to offer raw milk, which has the nutritional benefits still intact,” said Jill.

Jill’s case has received a lot of attention and publicity. She has been keeping her followers up-to-date on Facebook and is gaining new followers by the thousands. One of her fans recommended she contact the Farm-to-Consumer Legal Defense Fund (FTCLDF) as she was not a member before this incident. Jill visited our website and loved what we were doing and later said, “I joined because not only do I need help, other people like me need help, too.” Please note that it’s much easier for existing members to get legal assistance and we recommend joining before you have a big problem on your hands.

After Jill’s membership was approved, she connected with FTCLDF attorney Suzy Israel. As Suzy explained to Jill, the state defaulted to federal law because ice cream is not explicitly listed. The law (as it is currently written) is not in Jill’s favor, leaving Jill with two options: pasteurize her milk or try to change the law. Jill is attempting the latter. She has been in contact with several of her state representatives, and at least a dozen are on board.

“We are trying to sell our ice cream. It’s not unsafe, and it’s not a trick; we are doing it right. It’s helping us financially, and people love it. Now we need support to get this law changed.”

Jill’s case is, unfortunately, an issue of semantics, but there does seem to be ample support to amend the law and list raw milk ice cream. In an article from the Concord Monitor in New Hampshire, Colleen Smith, administrator of food protection section for the Department of Health and Human Services, said, “There’s certainly no extra health concern. Just because a product is frozen, it wouldn’t present any differences in terms of food safety risks.”

Jill hopes to be back in the ice cream business soon. In the meantime, she is dreaming up new names for her flavors. Vanilla Vigilante, Coffee Heath Behind Bars, Crookies and Cream, and Black Market Raspberry are some of the top contenders.