Falls Church, VA—December 16, 2015—After a two-day trial, a jury in Fort Worth Municipal Court found Farm-to-Consumer Legal Defense Fund (FTCLDF) member and Grandview dairy farmer Eldon Hooley guilty on one count of operating a food establishment that was selling food from an unapproved source. The jury fined Hooley $1500, and Judge Andrew T. Bradshaw ordered the farmer to pay $67 in court costs. Prior to sentencing, Hooley’s attorney, FTCLDF General Counsel Gary Cox, argued that Judge Bradshaw should rule in the defendant’s favor notwithstanding the verdict, but the jury’s decision stood.

Out of the four criminal charges initially brought against Hooley for violations of Ft. Worth food ordinances, two were dismissed shortly before the trial began and a third was not tried. The charge against the farmer stemmed from a May 7, 2014 raid by Ft. Worth code compliance officers at a dropsite for Hooley’s customers within city limits. At the time of the raid, Hooley’s license to sell raw milk was under suspension because milk from his dairy, Rosey Ridge Farm, was alleged to have tested positive for the bacteria Yersinia. According to public health records, the number of people who have become sick from consuming raw milk with Yersinia is zero. Texas is one of the few (if not the only) states that requires raw milk producers to test for Yersinia; suspensions for positive tests typically result in the loss of two weeks’ worth of sales for producers.

Hooley was not present at the May 7 raid, but the driver delivering coolers to the dropsite was using Hooley’s van; inside the coolers were containers with Rosey Ridge Farm labels on them. Under the Ft. Worth city code, a vehicle is classified as a “food establishment”; the city claimed that the containers were from an unapproved source since Hooley’s license was under suspension at the time of the raid. Even though prosecutor Bill Durkin was not able to prove during the trial that Hooley had actually authorized the driver to deliver the containers to the dropsite, the jury inferred, in convicting the farmer, that this is what had happened. 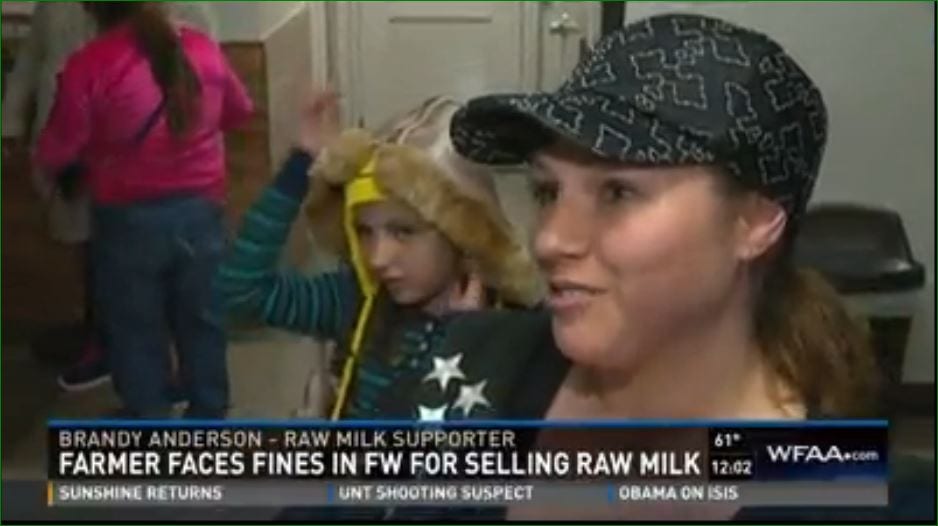 The Ft. Worth code definition of a food establishment is so broad that it even includes people who distribute food that don’t take any money and are not in a food-related business whatsoever. Cox got a witness for the prosecution to admit that someone who brings lettuce from their garden to their neighbor would be operating a food establishment.

Fort Worth, since the raid on the Hooley dropsite, has passed an ordinance prohibiting the distribution of raw milk within city limits.

Hooley customer Brenda Anderson summed up residents’ reaction to the city’s efforts to protect people from themselves, “I don’t agree having our government in our refrigerators. There’s no point in it. It’s our choice.” Anderson said in the past she has bought raw milk from Hooley because it helped with her son’s eczema.

Hooley has not decided at this time whether to ask for a new trial. FTCLDF will provide updates on the Hooley case as events warrant.

The Farm-to-Consumer Legal Defense Fund was formed to level the playing field and stop government agencies from bullying farmers like Eldon Hooley. General Counsel Gary Cox represents small farmers like Eldon and homesteaders around the country to defend them against government harassment.

FTCLDF is a true grassroots nonprofit that has never received any government funding; “corporate” donations come from small businesses that support local food production. The bulk of our revenues come from membership fees and individual donations.

Your support is appreciated. Anyone wanting to make a contribution to support the work of FTCLDF can make a donation online or send a check to:

Prefer to make a tax-deductible year-end donation? Donate online at bit.ly/NFG4FTC. You may also contact us by email at [email protected] or call 703-208-FARM (3276). Thanks for your support.