​The Wyoming Food Freedom Act (WFFA), which became law on March 3, has set the bar high for efforts at similar legislation elsewhere in the United States of America. Under the WFFA, the production and sale within Wyoming of any food except meat products by a producer direct to the “informed end consumer” is not subject to licensing or inspection. Poultry falls under the WFFA and is not included in the definition of meat products.

The only requirement of the WFFA is “the producer shall inform the end consumer that any food product or food sold at a farmers market or through ranch, farm or home based sales pursuant to this section is not certified, labeled, licensed, packaged, regulated or inspected.”

As of now, restrictions in the Federal Meat Inspection Act are the reason the WFFA does not include the sale of meat products but the Act’s sponsor, Representative Tyler Lindholm, indicated in an interview with Baylen Linnekin that there will be legislation in the future enabling farmers and ranchers to “sell beef and pork directly to consumers also.”

The WFFA covers not only food produced on farms and ranches but also food produced in private home kitchens. Over 40 states allow the sale of “cottage foods” produced in home kitchens with no or minimal regulation but the WFFA far exceeds them in scope. In states where cottage foods can be produced and sold without government inspection, sales are almost always limited to “non-potentially hazardous” food—food that does not require “time temperature control for safety (TCS) to limit pathogenic microorganism growth or toxin formation” [2013 FDA Food Code]. The WFFA legalizes the unregulated sale of any potentially hazardous food (other than a food containing a meat product) produced in a private home kitchen. The WFFA is essentially a giant cottage foods bill.

State cottage food laws provide exemptions from the requirements of the FDA Food Code, a model ordinance governing retail food stores, food service and food vending operations; all 50 states have adopted the Food Code in one form or another. The adoption of the Food Code is not mandatory for states but federal money and the drive for a uniform system of regulation has led states to adopt it anyway. The FDA Food Code is a major obstacle to food freedom. The 2013 edition of the Food Code (latest edition) is over 700 pages and sets standards for “management and personnel, food operations, and equipment and facilities…food establishment plan review, permit issuance, inspection, employee restriction and permit supervision.” Unless there are state law exemptions, it can be applied to farm stores, farm stands and private home kitchens selling food produced on the farm or in the home.

The late Wyoming state representative Sue Wallis, the original sponsor of WFFA back in 2009, claimed that the Wyoming version of the Food Code is “so broad that it includes private home kitchens as being subject to state regulation, and food prepared in a home kitchen is technically illegal to consume.” The WFFA breaks new ground by exempting from any food code requirement all direct producer-to-consumer transactions of any foods other than meat products.

Beyond freeing local producers from the chains of the Food Code, the WFFA is also an important step back toward a time when the government did not regulate farmer to consumer direct transaction. The current regulatory scheme had its beginnings with the passage of legislation such as the Federal Meat Inspection Act and the Pure Food and Drug Act, laws passed in 1908 because of food safety problems linked to the urbanization of food production. Farmers who sold their products direct to consumers did not cause the problems leading to the passage of federal food safety legislation but still were caught up in the one-size-fits-all regulatory maze that evolved. Before the twentieth century, farmers were scarcely regulated if at all; towns may have required licenses for farmers selling and peddling the products of the farm but licensing was for purposes of raising revenue only, not to be a mandate to conduct inspections. It shouldn’t be any different today.

Sue Wallis summarized it well when she wrote,

“There is a proper role for government food safety inspectors in those establishments that provide commercial and retail food-restaurants, grocery stores, processing facilities both large and small if the product is going to be sold wholesale, any place where food passes through multiple hands before it reaches the end consumer. But they have absolutely no business interfering in the private transactions between a single willing seller and a single willing buyer, who consumes the food in their private home.”

A comment Wyoming legislators made when considering WFFA was that consumers are and will continue to purchase the foods they want from the source of their choice regardless of whether the bill passed or not. People aren’t waiting for the government to “allow” them to buy food from an unlicensed producer before doing so.

The Wyoming legislation has galvanized the food freedom movement; it has increased the chances of success in states like Virginia and Maine where food freedom activists have already introduced similar legislation and will likely lead to the introduction of similar legislation in a number of other states in 2016. When potential sponsors are approached with proposed legislation, they often ask if there is any precedent for the bill they are being asked to carry; with the WFFA, they now have one.

It was not necessary for the drafters of the U.S. Constitution to include a provision about food freedom of choice because it was a right that was recognized at that time; this is no longer the case. Food freedom bills and state constitutional amendments, such as the ones introduced in Virginia1 and Maine2 this past session, are counters to the FDA Food Safety Modernization Act (FSMA) and the expanding federal role over food regulation. As a reminder, FDA’s views on freedom of choice were clearly stated in its reply brief to a 2010 lawsuit filed by the Farm-to-Consumer Legal Defense Fund challenging the interstate ban on raw milk for human consumption:

————–
1 Virginia HJ 519 – “That the people shall have a right to acquire, for their own consumption, farm-produced food, directly at the farm from the farmer who produced it.” 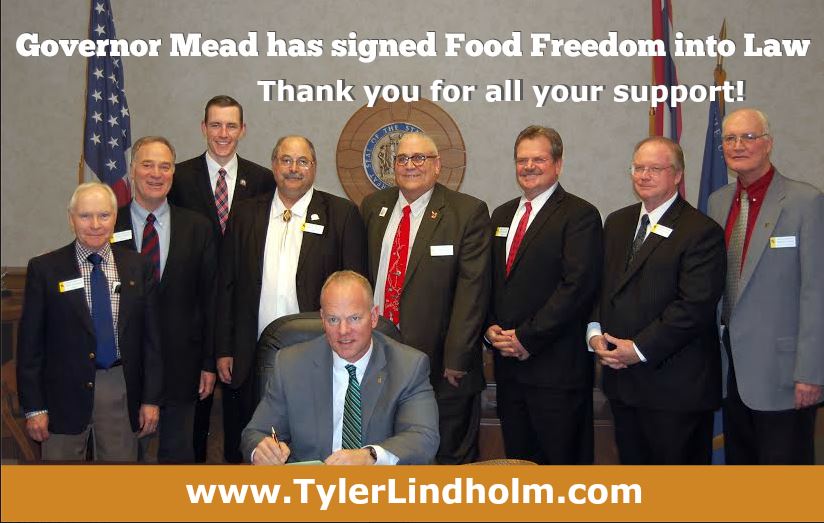 HB 56 allows the unlicensed, unregulated sale of any food except meat (the bill allows poultry) direct from producer to informed consumer. Sales are allowed at the producers’ premises, through delivery, and at farmers markets. The producer must inform the consumer that the product is neither regulated nor inspected. The stated purpose of the bill is to

“allow for the sale and consumption of homemade foods and to encourage the expansion of agricultural sales by farmers markets, ranches, farms and home based producers and accessibility of the same to informed end consumers [purchasers]”

According to a press release, the Department of Agriculture and state health officials attended the Senate committee hearing but did not testify against the bill though some raised concerns about food safety. The bill garnered grassroots support and the hearing was packed with consumers, ranchers, farmers and small food producers.

Farm-to-Consumer Legal Defense Fund (FTCLDF) member Frank Wallis was a leader in the effort to pass the bill. Wallis’ late sister, Representative Sue Wallis, was the sponsor of the original Wyoming Food Freedom Act when it was first introduced in 2009. FTCLDF worked to support passage of HB 56.

Congratulations to Wyoming for blazing a trail for other states to follow!