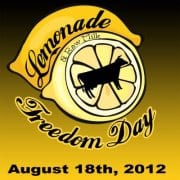 Aggressive regulators interfering with lemonade stands and raw milk with cookies have pushed fed-up parents to stage a protest on August 18 on the lawn of the U.S. Capitol in acts of civil disobedience against laws restricting food freedom of choice. The following press release was issued on August 6.

Mothers To Risk Jail over Lemonade or Milk
Farmers, Others Criminalized for Feeding Communities

What: Two groups of activists known as the Raw Milk Freedom Riders and Lemonade Freedom Day, are taking their raw milk and lemonade to the lawn of the US Capitol to celebrate what they call their right to “voluntary exchange.”

Why: Recent shutdowns of children’s lemonade stands and swat-style raids on small farmers have inspired these mothers and other activists to take their message to the Capitol where they plan to risk criminal charges, and possibly jail, by gathering for a picnic with these illicit foods. Media are invited to witness the peaceful exchange.

Where: 3rd Street S.W. between Maryland and Jefferson near the Capitol Reflecting Pool, Washington D.C.

Background: National Lemonade Freedom Day founder, and one of the main organizers of the August event, Robert Fernandes, began the tradition after seeing multiple news reports about children’s lemonade stands being shut down because they did not comply with regulations. FDA has engaged in several long undercover sting operations and raids against peaceful farmers and buying clubs over raw milk. FDA is also pressuring states to restrict raw dairy access.

These activists believe that people have the right to engage in voluntary exchange and peacefully obtain the food of their choice from the producer of their choice whether that’s raw milk from a local farmer or lemonade from the children next door.