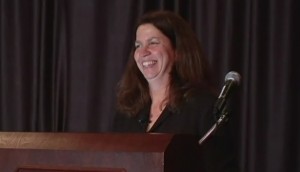 If everything that has been happening in recent months isn’t enough to convince you that we’re in for the fight of our lives, to protect something as basic as what we will feed our families (or the medical care they do or do not receive), then maybe the following from Elizabeth Gamsky Rich, Esq. will convince you.  Elizabeth is an attorney and Vice President of the Farm to Consumer Legal Defense Fund, and she spoke in May at a fundraiser dinner in St. Louis…

“We are at war.  It is a real war.  It’s a war to protect our right to food freedom and to opt out of the industrialized corporate run, agribusiness controlled food system that we find ourself with.

Much of the battle to turn this around lies with YOU.  Historically governments control people through fear, and that’s what we’re seeing now.  Fear of pathogens, fear of bio-terrorism, fear of contaminated food that will hurt us and oh my God, the children, we’ve got to protect the children.  This is the kind of fear-mongering that’s going on and allows the government to maintain control of our food supply.

By using heavy-handed enforcement techniques, what you’ll see in Farmageddon

(a don’t-miss movie!) is that since 2007 there have been armed raids, with government officials approaching with assault rifles to put farmers in hand cuffs, they infiltrate buying clubs as if it was a drug ring of the 1970’s.

They conduct very expensive surveillance operations using helicopters and classic black cars driving up and down farmland.  It continues, the massive expenditure of resources and personnel to vilify raw milk and shut down family farms and raw cheesemaking operations.  As consumers we need you to stand up!  We’ve been far too complacent for far too long.

If we don’t stand up to say ‘no more’, we are going to lose the right to consumer foods of our own choice.”

Ready to join the fight?  Here are three ways!

Watch Elizabeth’s entire talk: “How to Help Your Farmer During a Raid”