On August 5, 2014, Missouri voters will decide on whether to pass Constitutional Amendment #1, also known as the “Right to Farm Amendment” (aka the “Right to Harm” amendment).

While the right to farm is something everyone should support, Amendment One serves as a bio-tech/concentrated animal feeding operation protection act–doing little to help the family farm. Supporters of the amendment include Monsanto, Cargill, Missouri Farm Bureau, Missouri Corn Growers, Missouri Cattleman’s Association, and Missouri Pork Association–all entities working to further the interests of industrial agriculture.

Amendment One is a broad, vague measure that will make factory farms and biotechnology companies increasingly unaccountable for their actions.

Significant agribusiness money has gone towards the passage of Amendment One. The small farm community is strongly opposed to the amendment and needs a strong grassroots turnout to be successful on August 5.

Amendment #1 poses to add a new section to the Missouri Constitution, Section 35. The question posed on the ballot will read:

“Shall the Missouri Constitution be amended to ensure that the right of Missouri citizens to engage in agricultural production and ranching practices shall not be infringed?”

What is deceptive is that the actual language going into the Missouri Constitution is different. It will read:

Section 35. That agriculture which provides food, energy, health benefits, and security is the foundation and stabilizing force of Missouri’s economy. To protect this vital sector of Missouri’s economy, the right of farmers and ranchers to engage in farming and ranching practices shall be forever guaranteed in this state, subject to duly authorized powers, if any, conferred by article VI of the Constitution of Missouri.

This language resulted from passage of the Missouri House Joint Resolution 11 (HJR 11) earlier this year.

The phrase “farmers and ranchers” can easily be interpreted to mean not only “corporations” but even “foreign corporations.” Smithfield, which has a substantial presence in Missouri, was recently sold to a corporation in China. According to the online magazine, Food Processing:

Smithfield Foods has been a target of animal rights activists and was pressured into agreeing to phase out the use of gestation crates. Smithfield food brands include Smithfield, Eckrich, Farmland, Armour, Cook’s, Gwaltney, John Morrell, Kretschmar, Curly’s, Carando, Margherita and Healthy Ones.

This constitutional change could control over any other laws governing factory farming and the use of biotechnology. The push for Amendment One came about due to the passage of a bill regulating puppy mills in 2011 (SB 161) which resulted in the establishment of the Canine Cruelty Prevention Unit to enforce the new law. Supporters of Amendment #1 argued that the measure was needed to protect farmers from radical animal rights groups but it was clear there were other motives for the amendment as well.

Earlier versions of the amendment contained the phrases, “modern farming and ranching practices” and “agricultural technology and modern and traditional livestock production and ranching practices.” Such terminology easily encompassed the use of GMOs including genetically engineered plants, animals, herbicides and pesticides as well as CAFOs raising livestock under conditions so deplorable that antibiotics are added to the feed to mitigate the stress of confinement in limited space. These practices are not only an assault on the environment but also on human health.

These phrases were omitted from the final version of the bill that passed but the measure on the ballot is still broad enough to be interpreted in a way such that there could be no consequences for the damage caused by biotechnology and factory farming practices.

The vague language in the amendment would likely lead to many court challenges. Missouri already has a right to farm act that protects agricultural operations from nuisance suits “so long as all county, state, and federal environmental codes, laws, or regulations are met.” Biotech and factory farming corporations can afford the lawyers and attack laws regulating their operations until they get the results they want.

The Missouri Farm Bureau’s Fund to Protect Farming & Ranching and the Marion County Farm Bureau Committee were the only campaign committees registered with the Missouri Ethics Commission as supporters of Amendment #1 which have raised over one million dollars. Per Ballotpedia.org, the top five contributors to the campaign’s are: Missouri Soybean Association $100,500.00; Missouri Pork PAC $75,000.00; Missouri Pork Association $60,500.00; FCS Financial $48,000.00; and Missouri Farm Bureau $47,342.77. 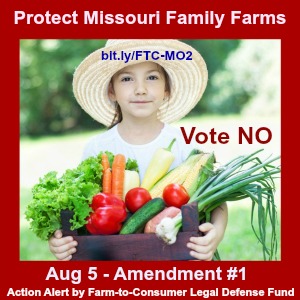