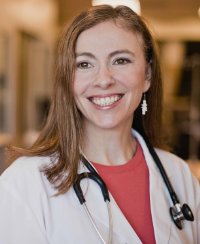 What do you do for the Lakers?

We operate on several levels so answering the question is a little complicated but the basics are that the Lakers now have a program called PRO Nutrition (Performance Recovery Orthogenesis) and a team of people running it: Gary Vitti; my husband, Luke; myself; and two more of the existing Lakers staff, Strength and Conditioning coach Tim DiFrancesco and Chef Sandra Padilla. We feed them everywhere they go, everywhere they want us to be involved.

How does your approach differ from others?

This is really a question about why I wrote our book, Deep Nutrition. There were at the time, and still are, no books other than ours that fill the void of describing everything a person should know about nutrition in order to get their bodies all the nutrients they need and none of the toxins—to the extent that is possible in this modern world. We do not make arbitrary recommendations and we do include a broader picture of what nutrition can do in the body.

How do your recommendations compare to the standard Paleo approach?

Not everyone does a Paleo approach the same way. There is no universal Paleo approach. Our philosophies are similar in some respects and different in others. I believe that our ancestors were healthier because of how they ate—which is in contrast with the standard way of thinking that in spite of all evidence to the contrary, people are living longer because of a low fat, low salt, low cholesterol approach. That doesn’t make sense to me and it doesn’t make sense to the rest of the ancestral food community—and I like the term “ancestral” rather than “paleo” because it is more inclusive.

Where we differ is that the Paleo approach requires people to go farther back in history than I am comfortable doing in order to get instructions on how we are supposed to eat. I like the idea, but we just don’t have enough information about what people in the Paleolithic Era actually ate. It’s very speculative and I prefer to go with what I feel we have more evidence of being successful and have more details of what they actually ate. In Deep Nutrition, we call them The Four Pillars of Cuisine.

The fundamental approach is not “eat this” or “don’t eat this;” it is that your health is the way it is because of what your ancestors did and how it affected your genes. Your story is part of an ongoing story. We want people to understand that where they would be headed—their story, their genes, their children—would be in an unhealthy direction if they were to listen to what most doctors say because they would be missing essential things from their diet. Your health does more than just prevent heart disease and Alzheimer’s—it even affects the way you look. There is a huge impact that your choices have on not only your health outcomes but also, if you haven’t reproduced yet, on how your children are going to look.

We are talking about epigenetics, aren’t we?
Epigenetics is the science of understanding that relationship. The details are very important, and we shouldn’t be making guesses. We know for sure what the people in this country were doing 100 years ago. So our approach includes anything a farmer could eat back then.

Does that include corn?
Sure. If it is produced a certain way and prepared in a certain way. It’s not just the food groups, but how the foods were grown, starting from the soil, and what happened to them on the way to your mouth. So, yeah, you can eat corn on our plan if you know where it came from and how it was grown—certainly non-GMO, preferably free of pesticides, and not processed in ridiculous ways. So yeah, I would say just eat corn. That’s what our ancestors did occasionally. They didn’t make it the main part of their diet with breakfast cereals and so forth. In Mexico they have corn masa; it can be very healthy and is actually a fermented food if it is prepared a certain way to enhance the nutritional value.

What are these Four Pillars of Cuisine that form the basis of your approach?
I looked at many cultures around the world and have yet to find a culture which has excluded one of these Four Pillars. The First Pillar is fresh food. And by fresh I mean raw/uncooked, vegetable products and animal products. Examples of this are sushi, steak tartare, eggnog—even a Caesar salad has a raw egg on it.

The Second Pillar is fermented and sprouted foods—enhancing the nutritional value of whatever food/crop it was originally. The original sushi, for example, was stored packed in rice where it fermented, and this protected it from molds. Fermented was the answer of how to preserve food before refrigeration, freezing, and canning. Sprouting was a similar concept in that you take the food that nature produced and do something natural to it, using natural technology, to enhance the digestibility and nutritional value. If you are going to have wheat, we recommend fermented or sprouted wheat; we would say that sprouted grain breads are fine as long as they are non-GMO, all organic, etc.

The Third Pillar we call “meat on the bone” because when people cooked their meat, they cooked it a certain way so as not to destroy the nutrients. They include the bone, the end of the bone and the joint material there, and the skin and collagen. You can’t get these anywhere else in the animal kingdom, and I consider this to be a missing food group with incredible beneficial effects for human connective tissue.

The Fourth Pillar is organ meats. We isolate them out because in this society, they are almost forgotten whereas in every other society they eat a lot more parts of animals. If you go to Asia, you are bombarded with all these unusual body parts like chicken feet. Fried lungs on a stick are popular in the Middle East. All these things have nutrients that you don’t get from other foods. They bump up the quality of your diet incredibly. If you plot out the nutrient content of the cartoon version of the paleo diet, meat and salad, you are going to be low in B vitamins and missing zinc, among others. If you add in organ meat, it fixes the problem—particularly with the B vitamins.   I have yet to find an example of an original culture that does not include all four of these pillars—Alaskan natives, French, Hawaiians, you name it—they all ate these four pillars. They had to eat them in order to be able to eat enough all the time. Because they did it, we need to do it, too.

This sounds a lot like Dr. Weston A. Price and his approach.

I actually looked at Dr. Price’s work extensively, and I am of a similar mindset. He was a big influence on me and part of my goal was to look for more recent research to reinforce his principals. And I found it. Dr. Price touched on the bone structure and teeth in his research and we actually found a dentist who has taken that research to the next level and developed a mathematical formula for that bone growth behavior. Everything Dr. Price did and said has been updated with a different branch of science—there’s epigenetics, there’s biomathematics (the science of understanding the math of the body), and there’s probiotics where Dr. Price talked about traditions.

Let’s get back to the Lakers—how did you get involved with them?

My husband and co-writer Luke thought the Lakers might benefit from reading Deep Nutrition, so he reached out to head trainer, Gary Vitti, who is always looking for a way for his athletes to get an edge. He thought our approach was intriguing and wanted to hear what we could do for the team. So we got on the phone, they asked me a bunch of tough questions about the science, and I answered to their satisfaction. Then he invited me to address the team and explain to them directly what we could do for them, something I now understand was unprecedented and I am very honored to have been able to do that now on multiple occasions.

What’s the hardest part about working with them?

The hardest part about working with the players is that they’re healthy. Only about 1 in 10 of my regular patient population are of the sort that they will change habits just because its good for them. Most people only do that after something life changing happens to them as a consequence of bad habits, like a heart attack. That said, a surprising number of Lakers have opted in proactively, which is a measure I think of how motivated they are to perform well in spite of what appears to be a disappointing season.

What are some of the hardest challenges we face in getting the rest of the professional athletic world on board with an ancestral eating approach?

Sponsorship. It’s the interfering substance that weighs down the wings of science like crude oil on a pelican. It’s why you find more university affiliated nutritionists and dietitians than not recommending things like PowerBars, G2, Gatorade, and making supplement-of-the-month recommendations—all based on whichever brand happened to be sponsoring the last conference they attended.

Tell me some of the advantages that you’ve seen from the team after adopting your approach.

What I’ve heard most often from the players is that they experience more energy and less joint pain. I’ve also seen numerous metabolic parameters improve, including markers of cardiovascular health.

How often is your approach criticized and how do you deal with it?

If you could tell coaches of other professional athletic teams one thing, what would it be?

Athletes must be able to flip quickly between burning sugar and burning fat, and long-term carb-loading often impairs that ability, with potentially serious performance and health consequences.

Why did you bring the Lakers together with Whole Foods Market?

Pastured meats are an essential part of our program. The Lakers fly to 30 cities around the US, and Whole Foods Market is currently the only national grocery store that carries these products. A lot of people assume, however, that the reason is that all Whole Foods Market products are healthy, or are trans fat free. This is not the case. In fact, Whole Foods leadership is aware, thanks to us, that their claim “Trans fat free since 2003” is false and they continue to make the claim, taking advantage of the public lack of information on this topic. As we explain in chapter 8 of Deep Nutrition, many so-called health foods contain significant amounts of toxic fatty acids and once you get them out of your diet, many chronic and nagging health issues can begin to resolve.

Services provided by the Farm-to-Consumer Legal Defense Fund (FTCLDF) go beyond providing legal representation for members like Mark Baker over the Michigan swine ISO issue. Educational and Political Action Services provide an avenue for FTCLDF to build grassroots activism to create the most favorable regulatory climate possible for our small farmers.