WASHINGTON, DC–June 11, 2013 (GlobeNewswire)–
Three quantitative microbial risk assessments (QMRAs) recently published in the Journal of Food Protection have demonstrated that unpasteurized milk is a low-risk food, contrary to previous, inappropriately-evidenced claims suggesting a high-risk profile. These scholarly papers, along with dozens of others, were reviewed on May 16, 2013 at the Centre for Disease Control in Vancouver, British Columbia (Canada), during a special scientific Grand Rounds presentation entitled “Unpasteurized milk: myths and evidence.”

The reviewer, Nadine Ijaz, MSc, demonstrated how inappropriate evidence has long been mistakenly used to affirm the “myth” that raw milk is a high-risk food, as it was in the 1930s. Today, green leafy vegetables are the most frequent cause of foodborne illness in the United States. British Columbia CDC’s Medical Director of Environmental Health Services, Dr. Tom Kosatsky, who is also Scientific Director of Canada’s National Collaborating Centre for Environmental Health, welcomed Ms. Ijaz’s invited presentation as “up-to-date” and “a very good example of knowledge synthesis and risk communication.”

Quantitative microbial risk assessment is considered the gold-standard in food safety evidence, a standard recommended by the United Nations body Codex Alimentarius, and affirmed as an important evidencing tool by both the U.S. Food and Drug Administration and Health Canada. The scientific papers cited at the BC Centre for Disease Control (BC CDC) presentation demonstrated a low risk of illness from unpasteurized milk consumption for each of the pathogens Campylobacter, Shiga-toxin inducing E. coli, Listeria monocytogenes and Staphylococcus aureus. This low-risk profile applied to healthy adults as well as members of immunologically-susceptible groups: pregnant women, children and the elderly.

Given that these QMRAs appear to contradict a long-held scientific view that raw milk is a high-risk food, Ms. Ijaz noted (in line with United Nations standards) that it is important to confirm their accuracy using food-borne outbreak data. The accuracy of recent QMRA findings was scientifically demonstrated using a combination of peer-reviewed data and Ijaz’s own recent scholarly working paper, which analyzed U.S. outbreak data for raw milk using accepted methodologies.

Peer-reviewed outbreak data confirming a negligible risk of illness from Listeria monocytogenes in raw milk was particularly notable, and demonstrates the inaccuracy of a high-risk designation given to raw milk in an older U.S. government risk assessment for Listeria. The forty-year worldwide absence of listeriosis cases from raw milk presented in a 2013 scholarly review, and affirmed in the QMRA results published in 2011, is attributed by European reviewers to the protective action of non-harmful bacteria found in raw milk.

“While it is clear that there remains some appreciable risk of foodborne illness from raw milk consumption, public health bodies should now update their policies and informational materials to reflect the most high-quality evidence, which characterizes this risk as low,” said Ijaz. “Raw milk producers should continue to use rigorous management practices to minimize any possible remaining risk.”

“The BC CDC should be commended for recognizing this important research on raw milk safety,” said Sally Fallon Morell, president of the Weston A. Price Foundation, a non-profit nutrition education foundation that provides information on the health benefits of raw, whole milk from pastured cows. “I look forward to productive discussion with the US CDC and Food and Drug Administration in light of this new scientific evidence.”

To view the May 16, 2013 Grand Rounds presentation from the B.C. Centre for Disease Control, visit: http://www.bccdc.ca/util/about/UBCCDC/GrandRounds/default.htm

Nadine Ijaz, MSc, gave her presentation before the provincial public health staff at the BC Centre for Disease Control in Vancouver, British Columbia, Canada. 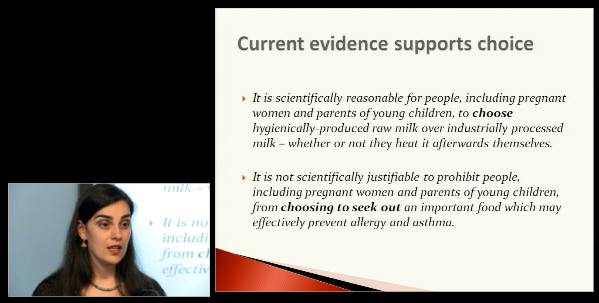 A 78-page PDF of the presentation slides is now available online through a link at www.bccdc.ca/util/about/UBCCDC/GrandRounds/default.htm

Unfortunately, this presentation is no longer available for viewing at the link given. Click here to view a few shots captured from the video.

Nadine Ijaz, MSc, RH(AHG), RST – Teaching Faculty at Pacific Rim College
Nadine is a medical herbalist, nutritionist, registered shiatsu therapist and independent health researcher who has been in clinical practice for over a decade. Her varied training at colleges of traditional Chinese medicine and shiatsu therapy complement her nutritional and herbal trainings under renowned practitioners. She was previously staff nutritionist at Inspire Health integrative cancer care centre, and has been running professional trainings and community workshops in all areas of her work for many years. Nadine has a deep commitment to financially-accessible models of integrative medical care, as to food sovereignty issues. Nadine has an MSc degree in herbal medicine from the University of Wales.