FTCLDF continues to promote the local food movement and defend against government interference in private arrangements. There have been significant court victories for Fund members during this time with progress on the legislative front as well.

HIGHLIGHTS FROM 2013
State-level work represents the best opportunity to advance the mission of the Fund and its members at this time. Over the past couple years there have been more enforcement actions against FTCLDF members at the local level, particularly for alleged zoning violations. At the federal level, there has been more support for some food freedom measures, but the bulk of our federal work continues to focus on defeating measures that are harmful to our members. The FDA Food Safety Modernization Act (FSMA) remains a major threat to food freedom choices. 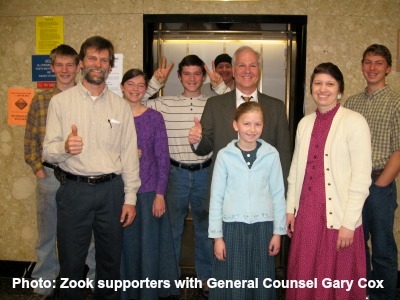 Highlights at a glance:

On May 24, 2013, after a contentious five-day trial, a Sauk County jury acquitted Fund member Vernon Hershberger on three of four criminal misdemeanor charges for violations of the Wisconsin Food and Dairy Code. Hershberger is a dairy farmer in Loganville who leases cows to a private buyers club, providing raw dairy products and nutrient-dense foods to club members. The State of Wisconsin brought charges against Hershberger for operating a farm store without a retail food establishment permit, operating a dairy farm without a milk producer license, operating a dairy plant facility without a license, and violating a hold order that officials from the Wisconsin Department of Agriculture, Trade and Consumer Protection (DATCP) had placed on food in his on-farm store during a 2010 raid.

Hershberger was acquitted on the three licensing charges, only being convicted of the hold order violation during the trial. Judge Guy Reynolds refused to let the jury hear testimony on the validity of the hold order. Hershberger is currently appealing his conviction for violating the hold order. Fund Vice President Elizabeth Rich and veteran trial attorney Glenn Reynolds did tremendous work in representing the courageous farmer with help from volunteer attorneys Amy Salberg and Ajna Wilson. The resources the Wisconsin Department of Justice spent on prosecuting the case were way out of proportion to the actual charges before the Court. The jury verdict vindicated Hershberger’s private contractual arrangement with food buyers club members.

DATCP had claimed broad regulatory powers over operations like Hershberger’s, asserting that it has jurisdiction over any dairy farm producing raw milk where any dairy product leaves the premises. This case represents the greatest court victory for the raw milk movement in the U.S.
[Read more about Hershberger case]

The ISO prohibits the possession of various swine including “feral swine…Eurasian wild boar (and)…Russian Wild Boar.” In December 2011 the Michigan Department of Natural Resources (DNR) issued a Declaratory Ruling (DR) in which the department said it would distinguish illegal from legal swine based on the animal’s physical characteristics rather than basing its decision on whether the pigs were in the wild or under human husbandry. According to the DR, a pig with a straight tail could be prohibited but so could a pig with a curly tail; virtually any domestically raised pig could be prohibited under the broad and vague standards.

Until shortly before Baker’s case was to go to trial, the State of Michigan was seeking a court order in a counter lawsuit fining the farmer $700,000 (or $10,000 each) for the 70 illegal pigs the DNR claimed Baker possessed. Then in a pretrial hearing on February 26, 2014, the State reversed its position, conceding that the farmer’s pigs were legal. Judge William Fagerman then dismissed the case with prejudice meaning DNR can’t take any action against Baker for the pigs he is now raising on his farm. Attorney Michelle Halley represented Baker.

On March 21, 2014, Marquette County Circuit Court Judge Thomas Solka ruled on the remaining swine ISO lawsuits, holding that both the ISO and DR were unconstitutional by violating the ‘equal protection’ and ‘due process’ clauses of both the Michigan and U.S. Constitutions. The State is appealing the Judge’s decision.

In addition to the state lawsuits, a federal lawsuit challenging the ISO is scheduled for trial in 2015.
[Read more about the Michigan swine ISO]

Fund General Counsel Gary Cox successfully represented Amish farmer Christian Zook in criminal and civil actions brought against the farmer for alleged violations related to food sales Zook made on his farm. In 2011 Zook built a barn on his property and used a portion of it for a farm store to sell raw milk and other farm produced foods to members of the Communities Alliance for Responsible Eco-Agriculture (CARE), a private food buyers club.

The Commonwealth of Pennsylvania filed a criminal charge against Zook for a violation of the state building code, claiming that since Zook used part of the barn for food sales, the barn was actually a “commercial building” and, therefore, not entitled to the exemptions from various provisions of the building code that an agricultural building would have. Having to comply with building code requirements would have cost Zook tens of thousands of dollars and potentially set a bad precedent for farmers elsewhere in the state.

At a hearing in Cumberland County District Court on March 11, 2013, Magistrate Judge Jessica Brewbaker dismissed the case, holding that a barn can be used for both agricultural and commercial purposes and still be under the building code exemption.

The civil suit against Zook and his wife, Lena, was filed by the Hopewell Township Board of Supervisors in September 2012. The suit claimed that the ‘land use’ permit the township had granted the Zooks to build the barn did not allow for its use as a retail store. The suit sought fines and a court order requiring the Zooks to file for a ‘conditional use’ permit which would also mean that they would have to comply with building code requirements for a retail sales establishment.

On October 24, 2012, the magistrate hearing the case ruled in favor of the Zooks, holding that the Pennsylvania Right to Farm Act protected their right to sell farm products without needing to apply for a ‘conditional use’ permit. The Zooks successfully represented themselves at the hearing but retained Cox when the Township Board of Supervisors appealed the decision. In an April 2014 hearing, the township withdrew its lawsuit.
[Read more about the Zook case]

The Fund actively supported the legislation. Fund member Martha Boneta was the driving force behind the bill. In 2012, Boneta was accused by Fauquier County zoning officials with multiple permitting violations and threatened with fines for activities on her farm, including pumpkin carvings, yoga classes, and a child’s birthday party.

Under the new law, on-farm stores selling foods produced by other farms will not be required to have either a state or local permit. The bill also frees farmers to sell more non-food products in their farm stores than they have in the past by eliminating both state and local permitting requirements.

In the words of Joel Salatin, who also contributed significantly to the bill’s passage, “Farmers may now wear some of the middle-man hats (where the profits are) and bring historically-normal processing and public interactive activities back to the farm…This is a great win for farmers who want to interact directly with their customers.” SB 51 could be just the first of a number of precedent setting local food bills to pass in the state.
[Read more about SB51, aka the “Boneta Bill”]

There were a number of other significant cases with which the Fund has been involved over the past year. Next is a brief review of some of them.

<Back to the top>