Washington, DC—(April 10, 2014 – Globe Newswire)—A proposed bill in Illinois banning the sale and distribution of natural or “raw” milk, is not going anywhere this session after legislators heard from “thousands” of natural milk proponents. The restriction, which was introduced as an amendment to an unrelated bill, would have banned the sale and distribution of raw milk in Illinois. The sponsor, Rep. Daniel J. Burke (D-1st district), chose not to move the bill out of committee after legislators were inundated with calls and emails from concerned Illinois citizens.

The Weston A. Price Foundation issued a point-by-point rebuttal of Illinois public health officials’ claims that a ban was warranted. See the “Response to the Northern Illinois Public Health Consortium, Inc.” on the Campaign for Real Milk website. [See the March 24 letter.]

“I am convinced, by virtue of the thousands of communications I’ve received, that natural dairy should continue to be made available to our society. If people believe this product is beneficial, I am not going to interfere with that,” stated Burke. Known in Springfield for his record in support of farmers, Burke claims, “It was never my intention to put any restriction on the farmers.”

Under current Illinois law, farmers can sell an unlimited amount of raw milk on the farm without a permit. And, according to those active in opposing the amendment, that is how they would prefer to keep the law.

“When I am able to purchase this healthful product within Illinois, I am able to support farmers I know and trust,” says Vicki McConnell, a Lee County resident and active supporter of access to natural milk. “Supporting our local economy is as important to me as accessing healthy products for my family. I am grateful that the legislators see the sense in not imposing additional restrictions on this voluntary exchange for food.”

After the amendment was introduced, consumers and farmers alike rallied to inform elected officials about the benefits of natural milk. Farmers brought samples of the milk to the state capitol.

Representatives learned about the importance of this local product, with some even opting to try fresh milk for the first time. Several allegedly said that it was the best milk they’ve ever had.

Burke says that he was asked to introduce the amendment by a Cook County Health Department official who was concerned with not having regulations in place for off-farm sales and distribution. Burke notes that he learned a lot from the people who contacted his office expressing their concerns.

“With the increasing popularity of the beverage, including legislation introduced on the national level, it just doesn’t make sense to interfere with the direct relationship between the people who produce this food and the people who want it,” says Burke. “I have no intention of moving forward with this bill. I would like to see the law remain as it is and I appreciate all those who took the time to contact me with their opinions.”

A Campaign for Real Milk is a project of the nutrition education nonprofit, The Weston A. Price Foundation (WAPF). Based in Washington, DC, WAPF is the leading advocacy group promoting broader consumer access to full-fat raw milk from pasture-fed animals. Contact [email protected] or visit realmilk.com and westonaprice.org.

Representative Daniel Burke Crosses Over to the Bright White Raw Milk Side! 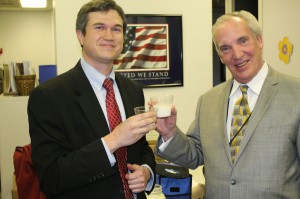 That is Rep. Burke on the right and Wes King of the Illinois Stewardship Alliance in Springfield on the left, who really went to bat for raw milk farmers and consumers when he became aware of the Bill. This represents the first official raw milk tasting in our capital which included several others in addition to the two gentlemen above.

And let me just say this about Representative Burke…I cannot imagine how tough it was for him last week to get ALL those hundreds and hundreds and hundreds of phone calls, emails, letters when he probably just assumed that The Northern Illinois Public Health Consortium had all the facts, which they didn’t. I also want to say how much I respect him for listening to those who contacted him, for educating himself further about raw milk and for being brave enough to admit he had been misinformed.
Representative Burke now says he has no intention to move forward with legislation banning raw milk.
Source: The Midlife Farmwife