Another Crack at the Ban

WASHINGTON, DC—(March 27, 2014)—Congressman Massie (R–KY), Chellie Pingree (D–ME) and a bipartisan coalition of 18 other lawmakers introduced legislation on March 26 to improve consumer food choices and to protect local farmers from federal interference. The two bills—the “Milk Freedom Act of 2014” and the “Interstate Milk Freedom Act of 2014”—are the first in a series of “food freedom” bills that Rep. Massie plans to introduce this year.

“As a producer of grass-fed beef, I am familiar with the difficulties small farmers face when marketing fresh food directly to consumers. Our bills would make it easier for families to buy wholesome milk directly from farmers by reversing the criminalization of dairy farmers who offer raw milk,” said Rep. Massie. “The federal government should not punish farmers for providing customers the foods they want, and States should be free to set their own laws regulating food safety.”

“Many consumers want to buy fresh, unpasteurized milk and regulations shouldn’t get between them and the farmer who wants to sell it,” said Rep. Pingree. “Given how many food scares there have been involving large-scale producers, it just doesn’t make sense to spend money cracking down on small, local farmers who are producing natural, raw milk and cheese. The enforcement of raw milk regulations has been overzealous and needs to be reined in.”

“As consumer, advocate, and mother, I have spent over a decade navigating a complex legal and regulatory maze to access raw milk and other fresh, local foods,” said Sarah Donovan of the Farm-to-Consumer Foundation. “These bills are an important step toward removing federal barriers between farmers and families.”

“Raw milk is the only food banned in interstate commerce,” said Pete Kennedy, President of the Farm-to-Consumer Legal Defense Fund. “Congratulations to Representative Massie for starting the process of repealing a regulation that thousands of otherwise law abiding citizens violate every week in this country.”

Raw milk is fresh milk that has not been pasteurized, and may contain beneficial nutrients that have not been eliminated by the pasteurization process. Although Congress has never passed a law banning raw milk, the Federal Food and Drug Administration (FDA) has used its regulatory authority to prosecute farmers for distributing raw milk.

The “Milk Freedom Act of 2014” [HR 4307] would provide relief to local farmers, small producers, and others who have been harassed, fined, and in some cases even prosecuted for the “crime” of distributing unpasteurized milk. This bill would prohibit the federal government from interfering with the interstate traffic of raw milk products.

Likewise, the “Interstate Milk Freedom Act of 2014” [HR 4308] would prevent the federal government from interfering with trade of unpasteurized, natural milk or milk products between states where distribution or sale of such products is already legal.

No provision of either bill would preempt or otherwise interfere with any State law. Both bills have been referred to the House Committee on Energy and Commerce.

Massie concluded, “Today, many people are paying more attention to the foods they eat, what it contains, and how it is processed. Raw milk, which has been with us for thousands of years, is making a come back among these discerning consumers. Personal choices as basic as ‘what we feed our families’ should not be limited by the federal government.”

The Farm-to-Consumer Legal Defense Fund defends the rights and broadens the freedoms of family farms and artisan food producers while protecting consumer access to raw milk and nutrient-dense foods. Those concerned can support the FTCLDF, a U.S. based 501(c)(4) nonprofit, by joining or donating online at farmtoconsumer.org or by calling 703-208-FARM (3276).

Use the FREE petition service to FAX your message to your U.S. Representative and both U.S. Senators.
Go now to www.bit.ly/FTC-RM1

Please join our Day of Action May 6, 2014 and ask your U.S. Representative to co-sponsor these two bills.

Who represents you in Congress?
Visit www.whoismyrepresentative.com for phone numbers and other links.

MAKE IT YOUR CHOICE 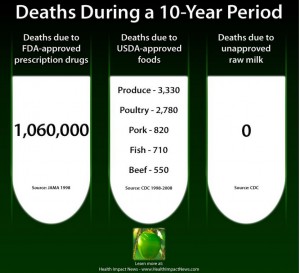 Fresh raw milk is currently the only food banned in interstate commerce. And while the constitution gives Congress the authority to regulate interstate commerce, the current ban in place was not put there by an act of Congress, but by the FDA, preventing states where the sale of raw milk is legal from being able to transport and sell that milk in other states (where it is also legal).

This action by the FDA is usually cloaked in the deception that it is for the sake of public health, however statistics clearly show that raw milk is no more dangerous than any other raw food, and in most cases is probably far safer when sold by organic grass-fed, small-scale dairy operations.

The sale of raw milk in the United States is first and foremost an economical issue, and deals with the rights of dairy farmers to be able to sell their products directly to consumers, bypassing the milk pools of Big Dairy, who enjoy tremendous political favor via farm subsidies. The ban on interstate commerce of raw milk and raw milk products is simply an attempt by Big Dairy to prevent consumers from having a choice between their highly processed commodity dairy products, and fresh wholesome products produced by small-scale pastured-based dairy farmers. Encourage your representatives to support this bipartisan legislation!