FTCLDF member Victoria Bloch, one of “The Rawesome Three”, shares her story. The Fund helped in providing legal representation in her case.

I was arrested the morning of August 3, 2011. It was completely unexpected. The arrest happened in the middle of the street, less than a half block from my house. It was surprisingly easy to get arrested: only a matter of minutes, really. “Can you step out of the car, please?” and “Put your hands behind your back,” and “Don’t worry about your car.” Easy. Quick. Efficient.

Who am I? I’m a middle-aged married woman who runs a graphic design business in partnership with my husband. I have been a chapter leader for the Weston A. Price Foundation since there were chapter leaders. And, at the time of my arrest, I’d been a weekend volunteer at the farmer’s market for over two years. The farm I volunteered for was a small livestock operation named Healthy Family Farms, and the farmer, Sharon Palmer, sold (and still sells) pastured meats and soy-free poultry and eggs. For about a year, she had also made fresh goat’s milk, as well as some yogurt and cheese, available to the members of her farm’s CSA. The dairy products were only available by order, and CSA members had to sign a waiver stating that they wanted fresh, raw foods produced without chemicals and processing, that they would not testify against the CSA, and the like. They also had to order any dairy products in advance of the market; in other words, there was no walk-up trade, because this was a private arrangement between the farmer and the customer.

However, when Rawesome Foods (a private, members-only buying club which had a goat herdshare arrangement with Sharon’s farm on behalf of their members) and the farm were raided in the summer of 2010, as shown in the documentary Farmageddon, Sharon stopped offering dairy products to her CSA members and Rawesome, and found homes for her beloved goats, fearing their seizure. Apparently, this did not stop the California Department of Food and Agriculture (CDFA) and the D.A.’s office from investigating her, James Stewart (the manager of Rawesome), and me for the next year – including making undercover farmer’s market buys, subpoenaing nine months of my personal e-mail, mounting pole cameras outside Rawesome, and much, much more. Sharon’s decision to close her dairy in 2010 certainly did not stop the D.A. from arresting her, and James, and me a year later.

AKA “The Rawesome Three”

Collectively, the three of us were charged with a variety of offenses – all of them felonies, since the D.A. chose to make almost every count a conspiracy to commit a misdemeanor, and conspiracy is an automatic felony. By this means, simple civil misdemeanors became felonies, landing our case in criminal court – on a par, legally speaking, with murders, drug deals, assaults, and other serious offenses.

I don’t hold the officer or the detective who arrested me responsible, not really; they were perfectly decent people doing a job for the D.A. (In fact, we ended up discussing food rights, digestive health, soy, and the Weston A. Price Foundation during the long ride that took me to Lynwood Women’s Detention Center.)

The D.A. in question, Kelly Sakir, spent a year and a whole lot of California taxpayer dollars because of an affidavit written by a special investigator from the CDFA, Scarlett Treviso. The affidavit itself represented a substantial number of taxpayer dollars spent to investigate a small family farm and a private buying club because of the – to them – serious crime of providing clean, fresh, raw dairy products to  customers who wanted them. (By the way, Sharon’s dairy tested completely pathogen-free, according to CDFA, though the affidavit did its best to obscure this fact.)

The nostrum “innocent till proven guilty” does not appear to hold much sway with the sheriff’s deputies trusted with the care of those who have been arrested. Spending time in custody (from the public strip search to the one-size-fits-none espadrilles to the freezing cold cells) is a depressing experience that seems designed with the primary purpose of dehumanizing those who have been arrested, as well as those monitoring them. So while I found surprisingly – and often touchingly – compassionate, supportive behavior on the part of many of the women who’d been arrested, I found what looked like deliberately abrasive, rude behavior on the part of the female deputies charged with our care. Think of the “mean girl” clique at school with bars and handcuffs added, and you might get just a taste.

Let me trickle in a little fresh dairy goodness at this point: Of course, everyone in jail wants to know why her fellows were arrested. The double-take when I said “milk” was universal, as was the shock when people learned my bail amount ($60,000), which was at least 30 times higher than that for anyone else I met. But “milk” did start a lot of conversations. As time went by, more and more women asked me to tell them about raw milk, culminating in a mini-class about the history and politics of raw milk for about a dozen women. Even the sheriff’s deputies at the courthouse got involved. As I was in the midst of the “class,” a deputy came to the door, demanding, “Are you Bloch?” Upon learning that I was, he asked indignantly, “What’s all this fuss about raw milk? I drink raw milk!” I told him a bit of what I’d been sharing with the women in the cell, and he said, “Come out here and tell these guys!” And so I gave another little “class” to six sheriff’s deputies (five of whom actually paid attention). So before I was released on my own recognizance 34 hours after my arrest, I had the opportunity to educate a few dozen people about raw milk – hardly an ideal classroom, but heck, it was a lot more fun than sitting around moping.

Another nostrum, “the wheels of justice turn slowly,” is dead on. The arrests took place August 3, 2011. Because of the voluminous amount of discovery (for which D.A. Sakir was apparently known), our attorneys requested extra time to review it. Two months later, D.A. Sakir was suddenly taken off the case, and two new D.A.s assigned, Evans and Castello (perfectly decent men saddled with a case that never should have happened, and nothing to do but plow on). Now they had to prepare for the case, and come up to speed with the complicated discovery, which took us all to, through, and well past the holidays and the new year. March saw a meeting with the attorneys and the D.A. to discuss possible pleas; however, the pleas presented were not attractive, and we all kept on. Making things harder, Sharon and James were arrested in March after one of our hearings, with a slew of new felony charges from the Ventura County D.A., Chris Harmon, all of which concerned the farm’s financing. (This case is ongoing.)

But at last our preliminary hearing was scheduled for early September, a year and a month following our arrests. And at this point, it was starting to look like things were going to get really expensive: a six-day preliminary, a minimum two-week trial with lots and lots of witnesses, lots of experts, lots of preparation – lots of money.

The day before the hearing, the D.A. offered me a misdemeanor plea that I could live with (essentially, having sold one jar of unlabelled milk); Sharon was offered a separate misdemeanor just before the start of the hearing. We had both wanted to be vindicated at a trial, before a jury of our peers. But we had to take into account fiscal reality, as well as the ongoing toll on our families and ourselves. So we each accepted the plea offered, ending the saga with a sigh instead of a yell, but grateful for an end nonetheless. James, now the only person remaining in the case, begins his preliminary hearing, barring a plea deal of his own, later in October. But as of September 7, 2012, my journey of thirteen months was at an end.

What have I learned? 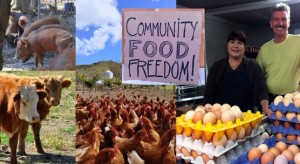 Sharon Palmer and James Stewart continue to be subject to prosecution by the Ventura County District Attorney’s Office. Please read and sign the petition at Change.org, “FREE THE FARMER & RELEASE THE MILKMAN! Stop the Wrongful Prosecution of Sharon Palmer & James Stewart; Drop All Charges Immediately.” Prosecutorial misconduct must not be tolerated!