Heritage breed hog farmers Mark Baker and Brenda Turunen will be having their day in court after judges in their respective cases denied motions to dismiss their lawsuits challenging the swine Invasive Species Order (ISO) issued by the Michigan Department of Natural Resources (DNR). A trial date has not been set yet for either case. The rulings increase the chance that DNR’s application of the ISO to heritage breed hogs may be on borrowed time. In the Baker case, the DNR has filed a motion asking the judge to reconsider his decision—a motion that rarely succeeds.

Possession of the following live species, including a hybrid or genetic variant of the species, an egg or offspring of the species or of a hybrid or genetically engineered variant, is prohibited:
…
(b) Wild boar, wild hog, wild swine, feral pig, feral hog, feral swine, Old world swine, razorback, eurasian wild boar, Russian wild boar (Sus scrofa Linnaeus). This subsection does not and is not intended to affect sus domestica involved in domestic hog production.

Even though DNR issued the order supposedly to be able to address any feral swine problem in Michigan, in a 2011 Declaratory Ruling the department disclosed that it would be basing its determination of whether a hog was prohibited under the ISO not on whether it was living in the wild or outside containment but rather on its physical characteristics.

According to the Declaratory Ruling, a pig with “either curly or straight tail structure” or “either erect or folded/floppy ear structure” could be prohibited under the ISO; under the ruling virtually any domestically raised pig, other than “sus domestica”, could potentially be prohibited by the order.

In ruling against DNR’s motion to dismiss Baker’s suit (originally filed in February 2012), Missaukee County Circuit Court Judge William Fagerman held that two causes of action the farmer brought in his lawsuit against DNR should be heard at trial. The first cause of action was an ‘equal protection’ claim in which Baker and his attorney Michelle Halley argued that Baker runs a farming operation for the production of pigs for pork and should not be treated differently than other farmers engaged in the same activity even if he were breeding and raising Russian boars or Russian boar hybrids. In rejecting DNR’s motion to throw out the claim, the judge held that the department had provided no rational basis as to why pork production operations should be subject to the ISO and that “genuine issues of material fact exist as to the application of the ISO to the Bakers with respect to Baker being treated differently than other domestic hog production facilities.”

The other accepted cause of action in Baker’s complaint is the claim that the ISO excludes Baker’s pig operation because it constitutes “domestic hog production.” DNR had argued that the exclusion only applied to “the species” sus domestica whereas the Russian boar belongs to “the species” Sus scrofa Linnaeus. In shooting down DNR’s argument, Judge Fagerman noted that “a reasonable reading of the ISO would indicate that if a real distinction were made between the two so-called species, that there would be no need to include “domestic hog production” in the language. A reasonable interpretation could be made that domestic hog production is completely excluded from the ISO.

The judge’s ruling means that DNR’s court battle with its most outspoken critic is not going away. Whether out of vindictiveness in response to Baker’s frequent criticisms of the department on the farmer’s website or in an attempt to intimidate Baker into dropping the case and settling his dispute with DNR, the department is seeking that the court fine Baker $700,000 for violating the ISO. Judge Fagerman stated in his opinion that “no evidence is presented that Baker’s pigs have ever escaped from their farming operation or become feral.” The judge also noted that DNR had produced no evidence Baker was in violation of any state or federal farming regulation. Attorney Halley researched the history of DNR fines and found that the only time the department actually collected $700,000 was against a confined animal feeding operation (CAFO) that had consistently violated environmental regulations over a period of many years.

Brenda Turunen is challenging the ISO from another angle. Turunen is a member of the Keweenaw Bay Indian Community (KBIC), a federally recognized tribe in Michigan’s Upper Peninsula. On March 29 she filed a complaint against both the DNR director Keith Creagh and the Michigan Department of Agriculture and Rural Development (MDARD) director Jaime Clover Adams in the U.S. District Court for the Western District of Michigan Northern Division seeking a court ruling that an 1842 treaty between the United States and the Lake Superior Chippewa Indians protected her operation, superseding any Michigan laws and regulations. Turunen also sought an injunction preventing DNR and MDARD from enforcing any Michigan law on her farming operation. KBIC is considered to retain the same rights the Lake Superior Chippewa had under the 1842 Treaty.

In the 1842 Treaty, the Chippewa ceded territory in the western Upper Penninsula of Michigan to the United States but reserved “the right of hunting on the ceded territory, with the usual other privileges of occupancy.” Turunen’s farm is located outside the KBIC reservation but within the territory transferred in the 1842 Treaty; she is licensed by KBIC to engage in her farming business.

DNR and MDARD argued in the motion to dismiss the case that the occupancy rights reserved in the 1842 Treaty did not include the right to raise pigs for commercial purposes; in rejecting this argument, Judge Gordon Quist held that Turunen and her attorney Joseph O’Leary had provided sufficient evidence that the phrase, the “usual privileges of occupancy” included commercial farming and animal husbandry. The trial is setting up as a duel of the two sides’ experts to prove what the 1842 Treaty actually covered. A favorable ruling for Turunen could mean that any commercial farming activity in the ceded Chippewa territory not prohibited by federal law would be allowed regardless of whatever state law would otherwise apply to the particular activity.

The decision for DNR to make at this time is on whether to spend the time and resources litigating the Baker and Turunen cases or to give up on regulating heritage hog farms through the ISO and concentrate on its main interest in issuing the ISO–getting rid of hog hunting on game preserves. A ban on hog hunting in private preserves would force hunters to hunt on public lands; an activity they must pay DNR for a hunting license.

Continuing on with the litigation could be an indication of the pressure the Michigan Pork Producers Association (MPPA) is putting on DNR to apply the ISO to heritage breed hog farms; the MPPA only wants the exclusion in the ISO to apply to confined animal feeding operations and not to heritage breed hogs raised outdoor. DNR never would have been able to issue the ISO and the Declaratory Ruling without MPPA’s support. Even if DNR continues on with the litigation, the recent rulings in the Baker and Turnen cases threaten the department’s illegal power grab in regulating farms through the ISO.

Mark Baker and Brenda Turunen are both members of the Farm-to-Consumer Legal Defense Fund (FTCLDF) which is administering a litigation fund for the Turunen case that is being funded through a grant from KBIC. FTCLDF is directly funding legal expenses for the Baker case. Those interested in supporting the Baker litigation can make a donation to FTCLDF; or a tax-deductible donation to the Fund’s sister organization for public interest litigation (PIL) can be written to the Farm-to-Consumer Foundation (FTCF). Donations to FTCF should have “PIL-Mark Baker” in the memo line. 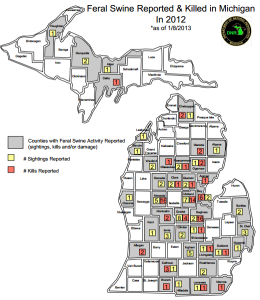