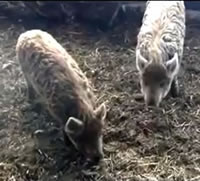 In a brazen power grab threatening the livelihood of hundreds of small farmers, the Michigan Department of Natural Resources (DNR) is using the state Invasive Species Act to expand its jurisdiction beyond hunting and fishing to farming operations. On April 1, 2012 an Invasive Species Order (ISO) that DNR issued in December 2010 prohibiting the possession of a number of different types breeds of swine will go into effect.

The order allows DNR to seize and destroy heritage breeds of pigs that farmers are raising; and DNR will not compensate farmers whose pigs are destroyed. In the logic of the department, “Indemnification in [Michigan] statute is for livestock and invasive species are not livestock, and are therefore, not eligible for indemnification.” [1]

With the order taking effect in less than a month, four different lawsuits have been filed recently in Baraga, Gogebic, Marquette and Missaukee Counties to stop the implementation of the ISO. The farmer who filed the lawsuit in Missaukee County is Mark Baker, a retired Air Force veteran who raises the heritage breed Mangalitsa pigs on his farm in Marion, Baker’s Green Acres. In the words of Baker’s state Senator Darwin Booher, “When Mark Baker retired from the Air Force after protecting our nation for 20 years, he never thought he would be fighting his own state government to protect his family’s livelihood. Unfortunately, that is what is happening now” [2, para. 1]. Joseph O’Leary, an attorney in Baraga, is representing Baker; he filed Baker’s complaint on February 24, 2012.

The Invasive Species Act gives DNR the discretion to add or delete from a list of species whose possession is prohibited. In addition, if either DNR or the Michigan Department of Agriculture and Rural Development (MDA) determines that certain requirements are met for a particular species, then it is mandatory that an ISO be issued prohibiting that species. DNR has not made it clear whether the ISO for swine was discretionary or mandatory.

There are two political agendas at work here. According to Baker’s complaint, DNR has tried unsuccessfully for many years to have the legislature eliminate hunting estates and preserves. In these facilities, privately owned pigs and other animals live in a contained natural environment where customers pay for a chance to hunt and harvest these animals. DNR earns revenue from fees paid by those hunting on public lands; getting rid of private hunting preserves would increase the department’s income.

The other agenda at work is that of the Michigan Pork Producers Association who has publicly supported the ISO. In a February 27 editorial published in the Manistee Advocate newspaper, Senator Booher mentioned, “The small farmers I have talked to wonder why the DNR is singling out their pigs and is joining forces with the Michigan Pork Producers Association on this issue. They believe the association wants all pigs to be raised in confinement facilities, and the best way to achieve that is to make it illegal to raise certain swine, especially those offering alternatives to the white pork raised in confinement” [2, para. 9]. At this time it is certain only that swine raised in confinement facilities would be exempt from the ISO. For the confinement operations, the ISO could effectively reduce or eliminate the competition.

MDA has been silent on the swine ISO. This is an agricultural issue that has the potential to affect hundreds of farms raising heritage breed pigs; why is the department allowing DNR to occupy its turf?  As Senator Booher pointed out in his editorial, DNR is charged with management of game and wildlife owned by the public—not the regulation of privately-owned animals [2, para. 11].

). This subsection does not and is not intended to affect

Baker’s complaint notes that “close examination of the wording of the ISO reveals that it outlaws the entire pig species, then makes an exception for pigs involved in ‘domestic hog production.’ Linnaeus is a reference to Carl Linnaeus, the 18th century biologist who created the modern day system of biological classification. Sus Scrofa and sus domestica are different names for the exact same species. They are capable of interbreeding and having fertile offspring. ‘Wild boar, wild hog, wild swine, feral pig, feral hog, feral swine, Old world swine, razorback, eurasian wild boar, Russian wild boar’ are nicknames given to various breeds of pig which the ISO lumps together collectively under the term Sus scrofa Linnaeus. They do not denote distinct or different species of pigs” [4, #22].

The term “Domestic hog production” is not defined in the ISO, or anywhere in Michigan law. The state Animal Industry Act (AIA) defines “domestic animal” as “those species of animals that live under the husbandry of humans” [4, #24]. The AIA defines feral swine as any who “have lived their life or any part of their life as free roaming or not under the husbandry of humans” [4, #26]. (Baker has never had one of his Mangalitsa pigs escape and become feral). Instead of basing its classification of prohibited species on this or a similar definition, DNR stated in a December 2011 Declaratory Ruling on the ISO that its intent was to identify which animals were prohibited by eight physical characteristics (listed in the ruling) and a ninth characteristic consisting of “characteristics not currently known to” DNR [5, p.4].

The characteristics include ones involving underbelly fur, tail structure, ear structure and skeletal appearance. Many of the eight characteristics are shared by pigs used in factory style pork production–pigs that are not prohibited under the ISO. Baker’s pigs also have a number of characteristics listed in the ISO. As pointed out in the farmer’s complaint, “There is nothing inherently vicious or unhealthy about the breeds of pigs targeted by the ISO. Any pig, whether used in ‘domestic hog production’ or not, will exhibit the same problematic behaviors if allowed to become feral, that is, to live outside the husbandry of humans. It is the state of being feral which causes the problems identified by the DNR in the ISO and declaratory ruling, not any particular breed of pig” [4, #32].

With the ISO scheduled to go into effect next month, it is still unclear how DNR plans to determine which swine are illegal to own under the ISO. At a meeting for swine owners called by the DNR on February 1, “DNR staff members, accompanied by DNR officers bearing firearms and taser weapons, refused to answer” questions in front of the entire group attending the meeting, only answering questions on a one-on-one basis [4, #33]. This way of providing answers has frustrated groups like the Michigan Animal Farmers Association (MAFA); in a February 8 letter to DNR Director Rodney Stokes, members of MAFA pointed out that the “procedure [used in the February 1 meeting] guaranteed that there would be no uniform understanding of the MDNR position and that our confusion over the ISO would continue” [6].

Instead of making a public pronouncement on how the ISO will be implemented and how it will determine which swine will be prohibited, DNR is giving answers to those questions on an individual basis telling farmers to bring pictures of their pigs. This sets up the daunting prospect of the DNR granting approval to each hog on every farm in Michigan on a one-by-one basis. Answers the department has provided to those seeking its opinion have been inconsistent as to what constitutes prohibited swine.

One thing Stokes did make clear in a letter to MAFA was that once the ISO takes effect, “DNR will use existing information that it possesses to determine which facilities are most likely to contain multiple Sus scrofa Linnaeus and therefore should be inspected on a priority basis, for prohibited swine.” [7, para. 2]

Senator Booher and others in the legislature have asked Stokes on numerous occasions to either rescind the ISO or revise it “to apply only to pigs running wild outside a fence” [2, para.12]. The DNR director has not responded to any of the requests.

Baker’s complaint against DNR asks the Missaukee County Circuit Court to enjoin the department from enforcing the ISO against him or his property. The complaint seeks various declarations from the court that the ISO violates rights guaranteed by the U.S. and Michigan constitutions including a declaration that the ISO constitutes an illegal taking of Baker’s pigs and the common law trademark he has created with his development of the Mangalitsa hybrid on his farm. There is strong demand for Baker’s products among consumers and restaurants in the Traverse City area. The farmer says that the ISO is a swipe at the local food movement and warns that government agencies in other states as well as the National Pork Producers Association are watching what happens in Michigan with an eye to taking similar action elsewhere.

The scenario of an unaccountable bureaucracy enforcing an ambiguous order at the expense of the property and livelihood of those providing healthy food to their communities should not stand. The ISO is a blatant attempt to take away property rights, freedom of food choice and market share through the force of law.
———————
1. DNR Director Rodney Stokes, Letter to Rep. Edward McBroom, 8 February 2012; 3rd para.