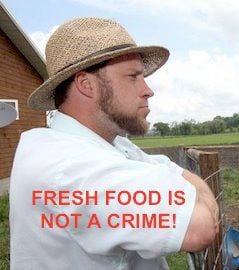 YOUR FUND AT WORK
Vernon, as a longtime member of the Farm-to-Consumer Legal Defense Fund, is receiving free legal representation valued at tens of thousands of dollars. In addition to the legal fees, the Fund is paying for all court costs and expert witness expenses. The Fund is not an insurance company and cannot guarantee representation on all legal matters; possible representation is just one of the benefits of membership.

You can help the Fund by donating to defray the legal expenses involved in this important case.

Wisconsin Amish dairy farmer, Vernon Hershberger of Loganville, has been charged with four misdemeanor counts for alleged violations of the Wisconsin food and dairy code. The charges are:

The holding order prohibited anyone from removing food products from refrigerators that had been taped in Hershberger’s farm store.

It started with the raid of his farm, Grazin’ Acres, in June 2010 and escalated from there [read “Wisconsin: DATCP Raids Hershberger Farm“]. Hershberger had been representing himself since the criminal complaint was filed against him in January 2012. In August 2012, Vernon requested FTCLDF represent him; his attorneys are FTCLDF Vice President Elizabeth Rich and Glenn Reynolds, both of Wisconsin.

Vernon has rejected a plea bargain that could have kept him out of jail. He was told he could plead guilty to two of four misdemeanors. In exchange, he would have had to pay a fine, been placed on probation, and would have had to agree to never sell or distribute raw milk products without a license.

Vernon’s case has drawn national attention and various events have been held in conjunction with court proceedings and pre-trial hearings, mostly organized by the Farm Food Freedom Coalition, including the signing of the Food Declaration of Independence in May 2012.

For more about Vernon, read “Brave Farmer Takes a Stand for Personal Liberty and Private Contracts” by Kimberly Hartke.

Watch video of the Court Summons being issued in December 2011.

Despite the timing of the raid, state officials denied that it had anything to do with the statewide controversy over raw milk. They said Hershberger was operating without the proper licenses.

[excerpt from Baraboo News Republic, “Business as usual at Grazin’ Acres” by Tim Damos, 17 May 2011]

More about the signing of the Declaration of Food Independence