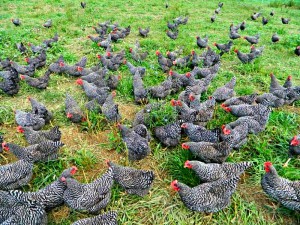 On March 26, Indiana Governor Mike Pence signed Senate Bill 179 (SB 179), a bill that expands on-farm poultry processing in the state as well as frees up poultry and egg sales from local and state regulation. The new law takes effect July 1, 2014.

State Senator Jim Banks (R-Columbia City) was the lead sponsor of the legislation; farmers and FTCLDF members Blaine Hitzfield and Pete Eshelman were instrumental in the bill’s passage. Senator Banks has been a strong ally for local food producers; SB 179 is one of several successful efforts on his part to increase economic opportunity and reduce the regulatory burden on small farms in Indiana. Last year Banks sponsored a bill allowing on-farm processing of rabbits that became law and earlier this year he was able to convince the Indiana Board of Animal Health to amend a regulation on wild pigs that was similar to the Michigan Invasive Species Order so that heritage breed hog farmers were no longer a potential target of the law.

Under current law, poultry producers can slaughter and process up to 1,000 birds a year and sell the poultry direct to consumers on farms, at farmers markets, and at farm stands without a state license. SB 179 increases that number to 20,000. Producers slaughtering and processing more than 1,000 birds a year must still comply with federal and state requirements for on-farm poultry processing.

The new law eliminates local jurisdiction over poultry, rabbit and egg sales from producers direct to the final consumer. Once SB 179 takes effect, local government agencies will no longer have licensing and inspection powers over producers of those foods for sales taking place on the farm, at farm stands and at farmers markets. The Indiana Department of Public Health will no longer have the power to license and inspect poultry producers processing between 1,000 and 20,000 birds on the farm per year as long as sales take place at the same venues.

The Indiana Board of Animal Health and USDA maintain jurisdiction over on-farm poultry processing and the State Egg Board keeps its regulatory authority over producers selling eggs direct to consumers at farmers markets (on-farm sales of eggs remain exempt from regulation). It’s still difficult to tell who is regulating who without a scorecard but the passage of SB 179 has made it easier.

SB 179 is typical in how progress is made in reducing burdensome regulations on local food producers. Occasionally, broader food freedom legislation is passed but more often it is one food, one agency at a time. Senator Banks, along with proactive farmers like Eshelman and Hitzfield have Indiana on the right track in improving the regulatory climate for small farms and keeping more of the food dollar in local communities one step at a time.

For example, in addition to providing advice on bill language, FTCLDF supports favorable legislation like SB 179 via action alerts, social media, and the online petition service.